YMCA was one of the largest providers of civilian support to soldiers, munitions workers and families during the First World War. This is often under reported.

Within ten days of the declaration of war, the YMCA had established 250 recreation centres in the UK. In November 1914, YMCA volunteers went to le Havre, France. Later their centres could be found at all the privipal army bases and main railway destinations. 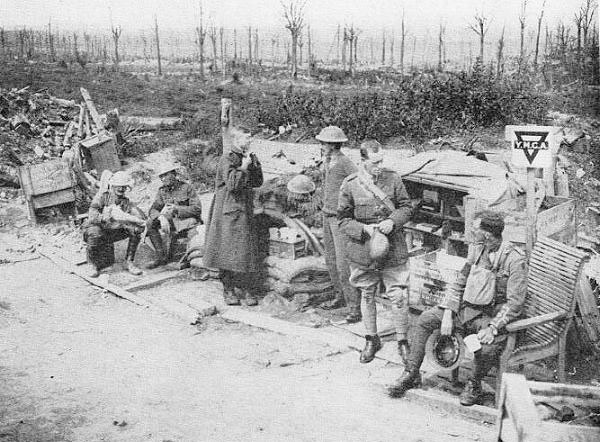 The YMCA poster below is one of many from the website of World War 1 Propoganda Posters – visit the website. 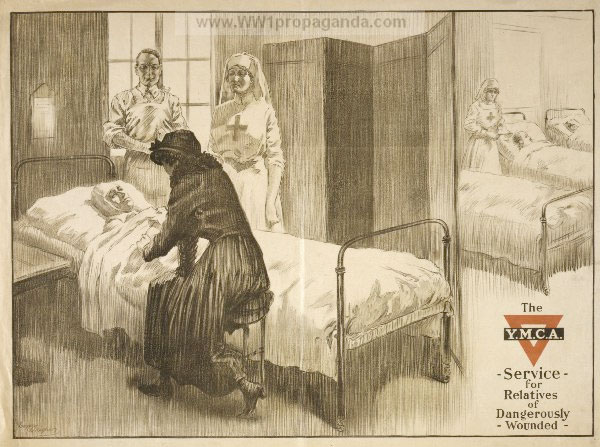 A sad statistic is that 38 members of the UK branch of the YMCA lost their lives during the conflict. They have military graves, not only in France and Belgium but elsewhere across the world – Salonika, Basra, Murmansk, Kantara, Suez and Cologne. View the records on the CWGC website

As well as the UK volunteers the American branch of the YMCA was just as involved in supporting the soldiers at war.
From WorldWar1Vets.com –

35,000 unpaid volunteers and 26,000 paid staff served in the YMCA during the First World War assisting the needs of the 4.8 million troops. They suffered 286 casualties and were awarded 319 citations and decorations including the French Legion d’Honneur, Order of the British Empire and the Distinguished Service Cross and Distinguished Service medal.

1. They operated 26 R&R leave centers, 1,500 canteens and 4,000 “huts” serving 2 million American servicemen.
2. The YMCA awarded 80,000 educational scholarships to veterans after the Great War, a forerunner of the GI Bill.
3. They also provided humanitarian services to more than 5 million prisoners of war on both sides.
4. From the time the US entered the war, until the Armistice was declared, thirty-three YMCA workers, twenty-nine men and four women gave their lives serving abroad..