Below are a few of the forms and notices relating to VAD nurses in WW1.

[With thanks to The Draycott History Group for bringing these to my attention and to www.scarletfinders.co.uk for their informative and interesting website]

A transcript is provided with each image for the benefit of those who use a screen reader. 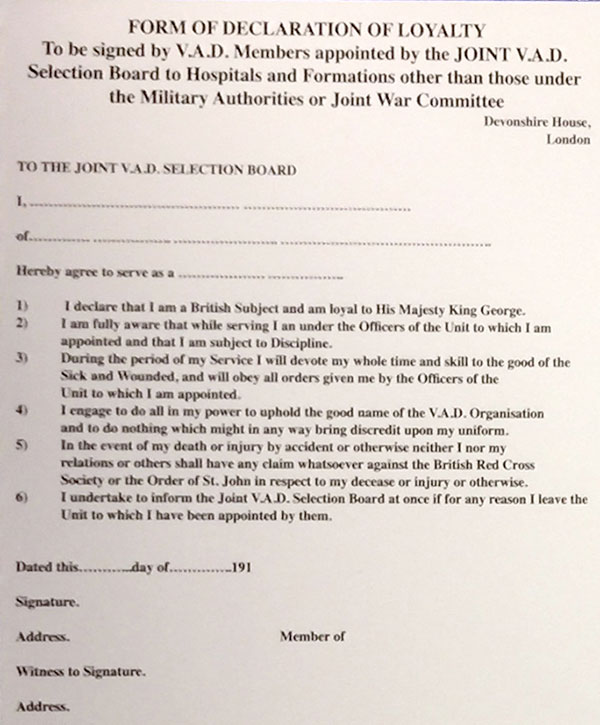 FORM OF DECLARATION OF LOYALTY
To be signed by V.A.D.Members appointed by the V.A.D.Selection Board to Hospitals and Formations other than those under the Military Authorities or Joint War Committee
Devonshire House, London

1) I declare that I am a British Subject and am loyal to His Majesty King George.

2) I am fully aware that while serving I am under the Officers of the Unit to which I am appointed and that I am subject to Discipline.

3) During the period of my Service I will devote my whole time and skills to the good of the Sick and Wounded, and will obey all orders given by the Officers of the Unit to which I am appointed.

4) I engage to do all in my power to uphold the good name of the V.A.D.Organisation and to do nothing which might in any way bring discredit upon my uniform.

5) In the event of my death or injury by accident or otherwise neither I nor my relations or others shall have any claim whatsoever against the British Red Cross Society or the Order of St John in respect of my decease or injury or otherwise.

6) I undertake to inform the joint V.A.D.Board at once if for any reason I leave the Unit to which I have been appointed by them. 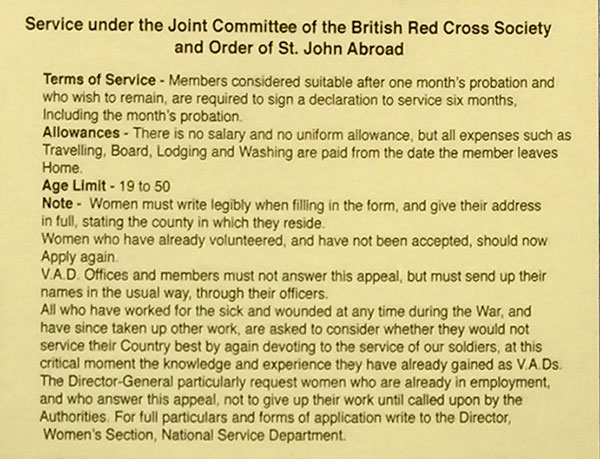 Allowances – there is no salary and no uniform allowance, but all expenses such as Travelling, Board, Lodging and Washing are paid from the date the member leaves home.

Note – Women must write legibly when filling in the form, and give their address in full, stating the county in which they reside.
Women who have already volunteered, and have not been accepted, should now Apply again.
V.A.D.Offices and members must not answer this appeal, but must send up their names in the usual way, through their officers.
All who have worked for the sick and wounded at any time during the war, and have since taken up other work, are asked to consider whether they would not serve their Country best by again devoting to the service of our soldiers, at this critical moment the knowledge and experience they have already gained as V.A.Ds.
The Director-General particularly request women who are already in employment, and who answer this appeal, not to give up their work until called upon by the Authorities. For full particulars and forms of application write to the Director Women’s Section, National Service Department. 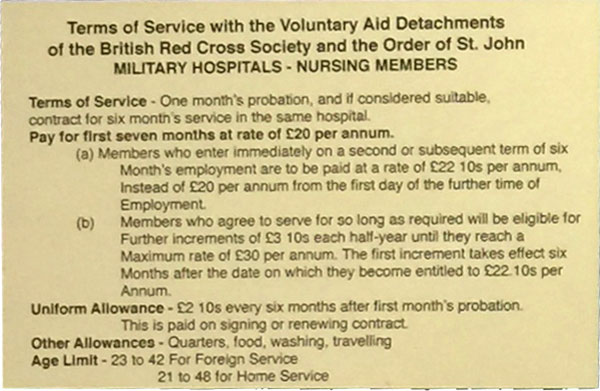 Terms of Service – One month’s probation, and if considered suitable, contract for six months service in the same hospital.

Pay for first seven months at rate of £20 per annum
(a) Members who enter immediately on a second or subsequent term of six Month’s employment are to be paid at a rate of £22.10s per annum. Instead of £20 per annum from the first day of the further time of Employment.
(b) Members who agree to serve for so long as required will be eligible for further increments of £3.10s each half year until they reached a maximum rate of £30 per annum. The first increment takes effect six Months after the date on which they become entitled to £22.10s per Annum

Uniform Allowance – £2.10s every six months after first month’s probation. This is paid on signing or renewing contract. 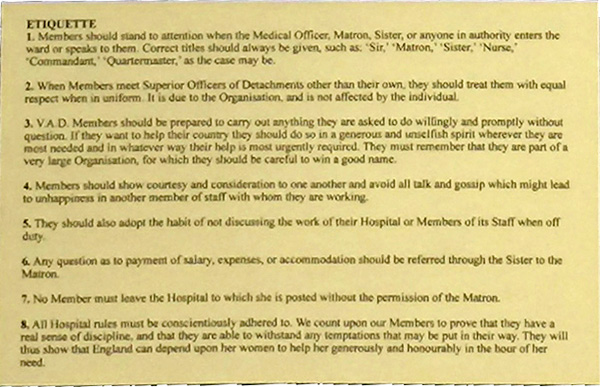 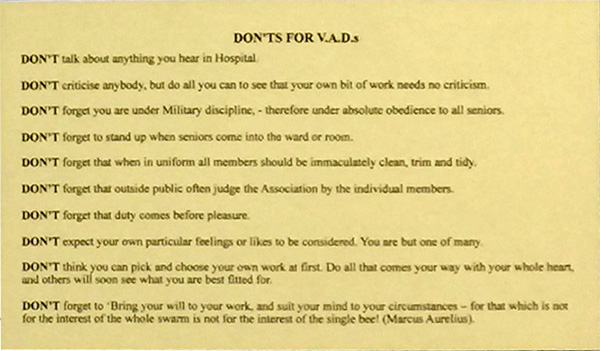 DON’T talk about anything you hear in Hospital.

DON’T criticise anybody, but do all you can to see that your own bit of work needs no criticism.

DON’T forget you are under Military discipline, – therefore under absolute obedience to all seniors.

DON’T forget to stand up when seniors come into the ward or room.

DON’T forget that when in uniform all members should be immaculately clean, trim and tidy.

DON’T forget that outside public often judge the Association by the individual members.

DON’T expect your own particular feelings or likes to be considered. You are but one of many.

DON’T think you can pick and choose your own work at first. Do all that comes your way with your whole heart, and others will soon see what you are best fitted for.

DON’T forget to ‘Bring your will to your work, and suit your mind to your circumstances – for that which is not for the interests of the whole swarm is not the interest of the single bee’ (Marcus Aurelius). 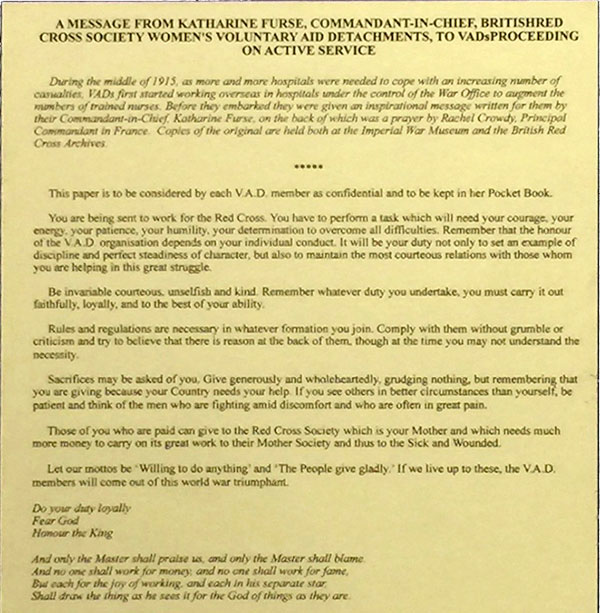 During the middle of 1915, as more and more hospitals were needed to cope with an increasing number of casualties, the VADs first started working overseas in hospitals under the control of the War Office to augment the numbers of trained nurses. Before they embarked they were given an inspirational message written for them by their Commandant-in-Chief, Katherine Furse, on the back of which was a prayer by Rachel Crowdey, Principal Commandant in France. Copies of the original are held both by the Imperial War Museum and the British Red Cross Archives.

This paper is to be considered by each VAD member as confidential and to be kept in her Pocket Book.

You are being sent to work for the Red Cross. You have to perform a task which will need your courage, your energy, your patience, your humility, your determination to overcome all difficulties. Remember that the honour of the VAD organisation depends on your individual conduct. It will be your duty not only to set an example of discipline and perfect steadiness of character, but to maintain the most courteous relations with those whom you are helping in this great struggle.

The invariable courteous unselfish and kind. Remember whatever duty you undertake, you must carry out faithfully, loyally, and to the best of your ability.

Rules and regulations are necessary in whatever formation you join. Comply with them without grumble or criticism and try to believe that there is a reason at the back of them, though at the time you may not understand the necessity.

Sacrifices may be asked of you. Give generously and wholeheartedly, judging nothing, but remembering that you are giving because your Country needs your help. If you see others in better circumstances than yourself, be patient and think of the men were fighting amid discomfort and who are often in great pain.

Those of you who are paid can give to the Red Cross Society which is your Mother and which needs much more money to carry on its great work to their Mother Society and thus to the Sick and Wounded.

Let our motto be ‘Willing to do anything', and ‘The People give gladly’. If we live up to these, the VAD members will come out of this world war triumphant.

Do your duty loyally
Fear God
Honour the King

A prayer by Rachel Crowdy

Lord, who once bore your own Cross shoulder high to save mankind, help us to bear our Red Cross Banner high, with clean hands unafraid.

Teach us no task can be too great, no work too small, for those who die or suffer pain for us and their Country. Give unto those who rule a gentle justice and wisely guiding hand, remembering “Bless it are the Merciful”. And when peace comes grant neither deed nor word of ours has thrown a shadow on the Cross, nor stained the flag of England.