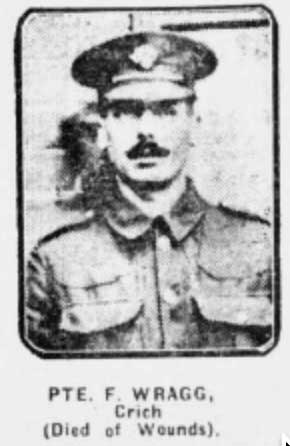 Born in 1886, Frederick worked as a quarryman before enlisting in the Grenadier Guards at Derby. He entered France in December 1915 and died of his wounds on 18th August 1916 aged thirty after being transferred back to the UK. He is buried in Crich Churchyard. It is possible that he is the F. Rodgers on the Sawmills Memorial – his half-brothers Amos, George and James are on the Roll of Honour. In 1911 Frederick was recorded in the census as Frederick Rodgers.

Derbyshire Courier ,26 August 1916
Grenadier Guardsman death from wounds
War’s toll on the nation’s manhood was vividly bought before the minds of the Crich people on Tuesday, when the internment of Private Fred Wragg, 3rd Grenadier Guards, of Crich, took place with military honours at the Parish Church. Private Wragg was wounded in France early in July, the intimation being conveyed to his Uncle Mr James Wragg, of Cliffe House, Crich in a letter from an army chaplain which appeared in the “Courier” at the time. He was wounded in the head by a bullet which injured his skull and he was sent to the County London Hospital, Epsom, but his chance of recovery was hopeless and he passed away last Friday. Sergt W.Curzon, Crich, who is in the same hospital was with him up to his death. The body was bought to Ambergate on Monday and later to Cliffe House for internment the following day. Practically the whole of the parish, in addition to a number of people from Holloway and Ambergate, assembled at the Churchyard to pay their tribute of respect to the dead soldier while nearly every blind was drawn in the upper end of Crich. The procession was headed by the Crich Silver Band. Mr S.Hollingsworth conducting, and the Dead March was impressively played. Draped with the Union Jack the coffin was born by Private Wragg’s fellow workmen of peace times, whilst in addition to the family mourners the workmen connected with the Clay Cross Companies quarries and lime works at Crich followed. The firm was represented by Messrs. E.H.Huddlestone and H. B Boag. A squad of the 1st Notts and Derbys, with Lance Corporal Knipe in charge, also followed.
After the service in church, and after the committal rites had been carried out by the Rev James Williams, the band gathered at the head end of the grave and played “Lead, kindly light,” followed by the “Last Post,” the bugler being drummer Benton of the Notts and Derbys. From the church the band led the procession back to Cliffe House with the march “Farewell my Comrades”. Later, with the bells deeply muffled, Messrs. T.Stimpson, B.Bowler, C.Walters (Pentrich), G.Brown, W. Drake, and Gunner J.Worthy rang a peal of 480 Grandshire doubles. The large number of beautiful floral tributes sent included a wreath from Messrs. E.H. Huddleston and H.B.Boag, and wreaths from “Officers and Staff” and “ Comrades” of County London Hospital, Epsom the latter being designed in red white and blue.
Private Wragg, who was 31 years of age and enlisted in the Grenadiers nearly eighteen months ago. He was generally regarded as the smartest soldier sent from Crich to the present war, and his progress in marksmanship was a feature of his training. It resulted in his winning several shooting competitions. He was formerly a member of Crich Band. His half brother Seaman W Rogers was lost on the “Black Prince.”
His half brother was Seaman James Rodgers. 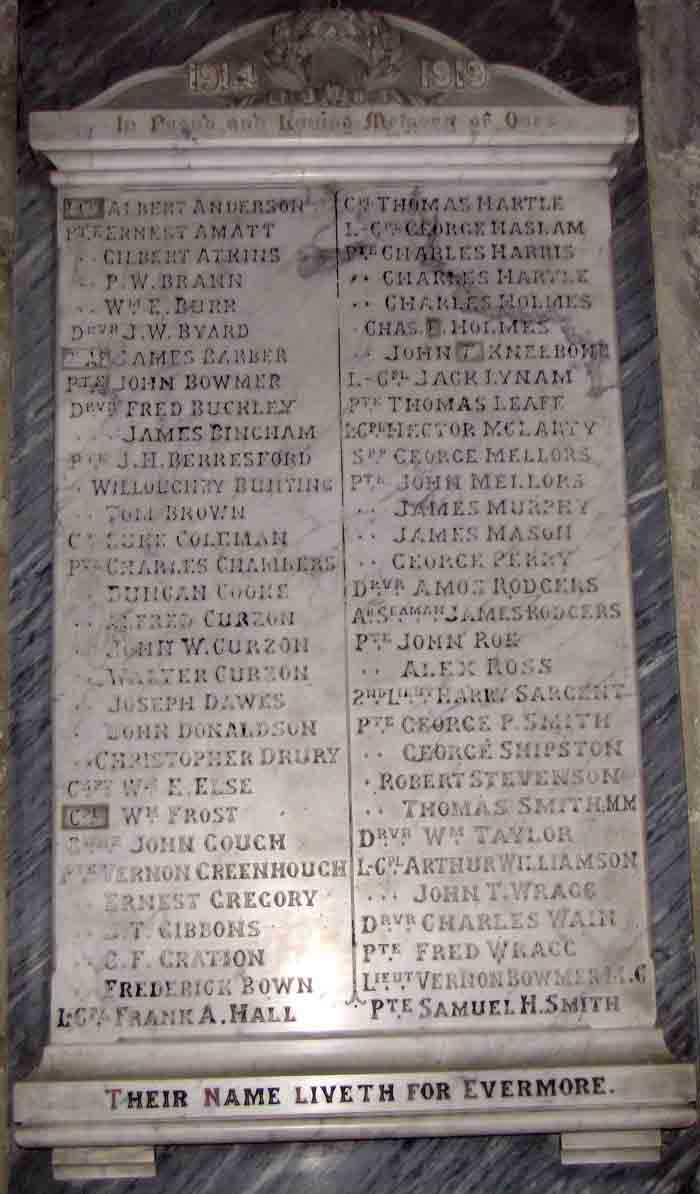 Fred is on the memorial plaque to the fallen in St Mary's Church, Crich 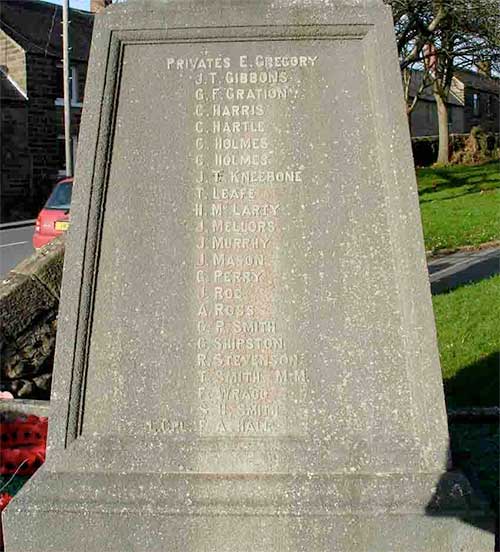 Amos, James and Frederick Rodgers are remembered on the Sawmills Memorial 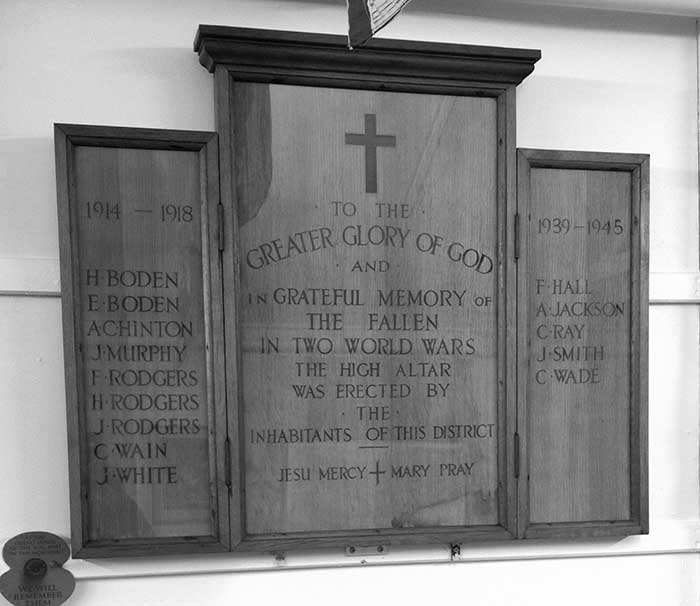 Sawmills memorial in the Village Hall

Medal Roll Index Card
He was awarded the Victory, British War and 15 Star Medals
He entered France 09/12/15 and died of his wounds.

Ancestry Record
He enlisted at Derby, was a guardsman serving with the 3rd Battalion, and died of his wounds in the UK 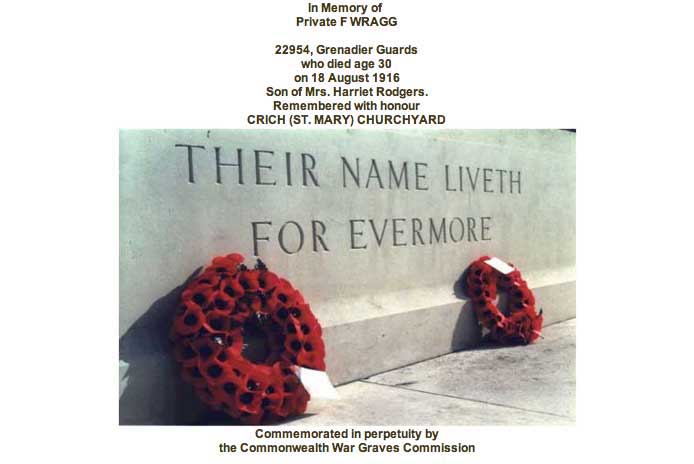 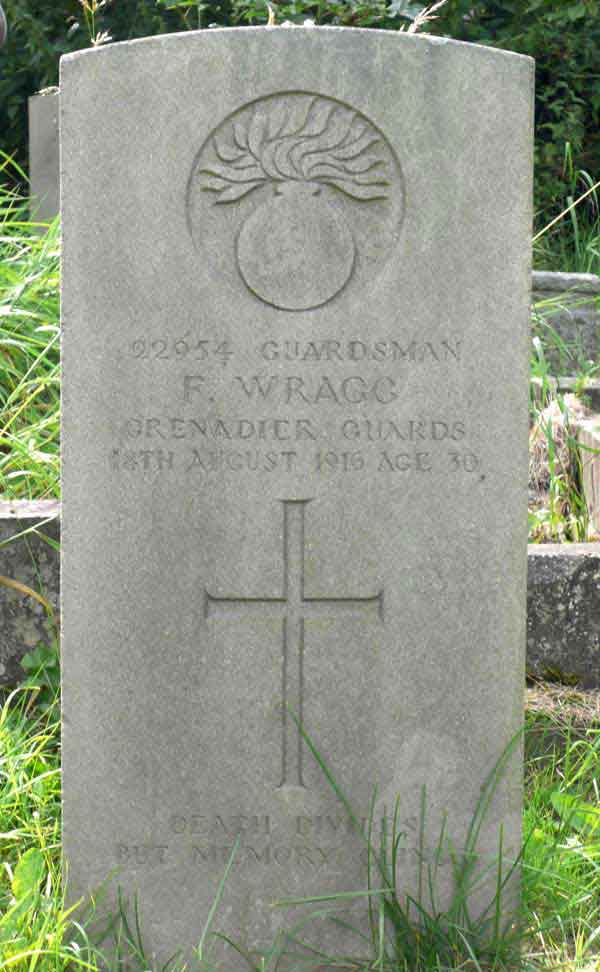