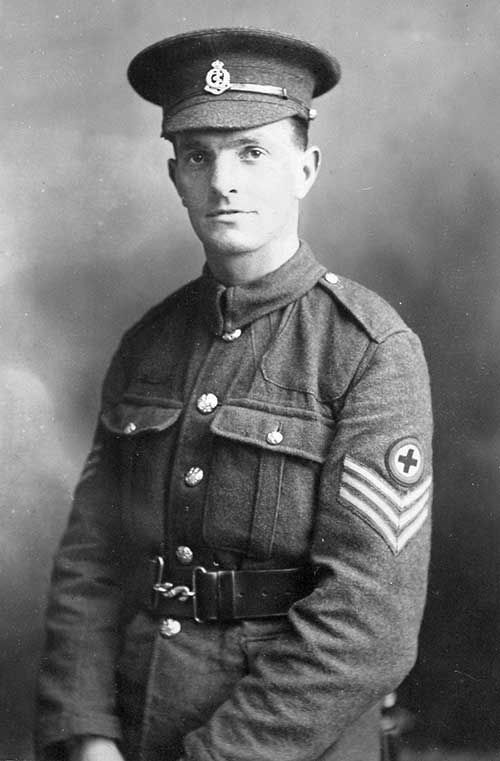 David was born in 1889 at Crich, and worked as a chemist. He joined the Royal Army Medical Corps and entered France in April 1915. He served on His Majesty's Hospital Ship "Cambria". The dates of his service are unknown, but (according to the war diaries) HS Cambria was sailing continually between Boulogne or Calais and British ports, bringing back wounded soldiers for treatment in England.

He married Dorothy Murfin in Nottingham in 1926. They lived in Chapel Street, Ripley, working in the family herbalist shop, D. Wilkinson and Sons. Later they owned and ran the garage on Derby Road which subsequently became the Ripley Co-op’s garage.

David was the son of David and Mary Wilkinson, both of Crich (there were four other children, three boys and a girl). The census is misleading – Henry Wilkinson was Mary's second husband, and the brother of her first husband – therefore the children's stepfather (and uncle). Mary and Henry married in 1894 and had a son of their own, William Percy. They lived at Crich Carr, close to the Methodist Chapel before moving to Ripley.

David was born in 1889, (the Crich Parish Records show David Harold Wilkinson baptised 13 May 1894 to Mary Wilkinson); he married Dorothy Murfin in Nottingham in 1926, and they had a daughter, Muriel. After the war he lived in Ripley, probably working in the family herbalist shop, D Wilkinson and sons, in Chapel Street, but later owning and running the garage on Derby Road which subsequently became the Ripley Co-op's garage.

David Wilkinson's brother Daniel Wilkinson is also on the Roll of Honour.

The initialled Wilkinson names in the 1911 census are: A.E is Ann Elizabeth Ellen; W.P is William Percy; J.N is James Noah; D.H is David Harold; F.H is Frederick Herman; D.B is Daniel Broadhurst