Biography
Daniel was baptised at Crich on 6 April 1879 at St Mary's, to David and Mary (nèe Broadhurst) and worked as stonemason. He enlisted in the Army in December 1915 but was badly wounded; his leg had to be amputated, and consequently he was discharged on 10th January 1919 with the Silver War Badge when he was aged forty. He had married Alice Madeleine Pitt at Birkenhead during 1916. 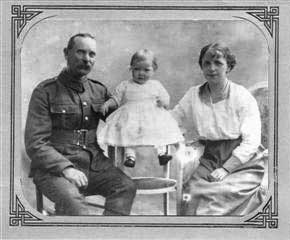 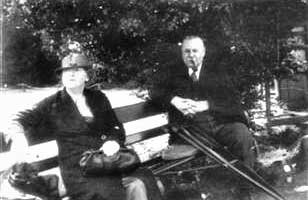 Daniel and Alice in later life

Family History Note: Irene Wilkinson
Daniel was a Sapper in the 7th Battalion (Pioneers) York and Lancaster Regiment, which from July to November 1917 was involved in the 3rd Battle of Ypres. He was injured on 10th October 1917 during the Third Battle of Ypres, receiving a gunshot wound and fracture to his right leg, and received treatment in a field hospital the following day. At some as yet unknown date and place, much of his right leg was amputated, but he was not discharged until 19th January 1919.

Daniel Wilkinson's brother David Wilkinson is also on the Roll of Honour.

The initialled Wilkinson names in the 1911 census are: A.E is Ann Elizabeth Ellen; W.P is William Percy; J.N is James Noah; D.H is David Harold; F.H is Frederick Herman; D.B is Daniel Broadhurst.