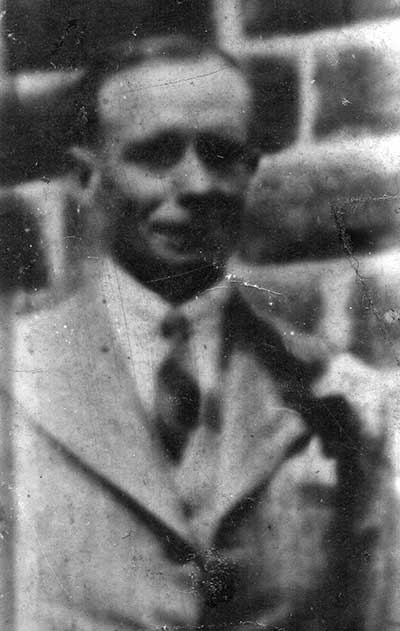 Biography
In 1886 George Ernest Watts, known as Ernest, was born at Brampton, on the outskirts of Chesterfield. He was the son of William Watts and Eliza Dawson. By 1911 he was working as a butcher’s assistant while living with relatives in Brampton. At this time his widowed father was living with his daughter at the hamlet of Sawmills, just outside the boundary of the parish of Crich.

Ernest served in the army during the war, with the rank of Private. After he was discharged from the army, he returned to his occupation as a butcher and by 1923 was living in the Derbyshire village of Holloway, close to Crich. Ernest remained a resident of Holloway for the Ernest Watts in later life rest of his life. He was later employed at the Mill Close lead works at Darley Dale and in 1923 he married a widow named Beatrice Ethel Maskrey (née Woodward).

George Ernest Watts was killed in a road accident near High Peak Junction at Cromford on 28th August 1941, aged fifty-five years. At the time he was a pillion passenger on a colleague’s motorbike, returning home from work at Darley Dale. The motorbike had been involved in a collision with another vehicle, which subsequently disappeared from the scene of the accident. Both Ernest and his colleague were killed in the accident.

Belper News, 12 April 1918
Private G.E. Watts, of the Durham Light Infantry, has been seriously wounded in the leg by shrapnel and is in hospital in Scotland. He had been in France about six months, having joined the Army in July 1916. His residence used to be at Bull Bridge, and his employment was with the Ripley Co-operative Society. He is the son of the late Mr William Watts, of Holymoorside. Mrs W C Sayles, of 37 Sheffield Road Killamarsh, sister of Private Watts and formerly of Bull Bridge, has received official intimation of her only brother's condition. Private Watts was in the butchery department at Ripley Stores and is well-known in the Ambergate, Crich and Ripley district.