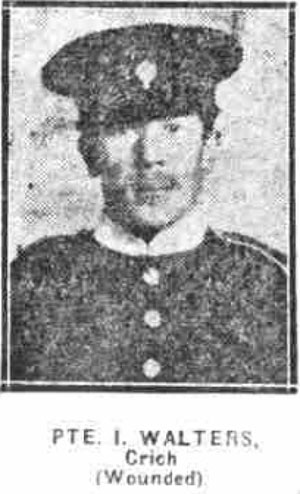 Biography
The only candidate appears to be Isaac Walters, born in 1883. He was the youngest child of Joseph Walters and Sarah Harrison, the latter of whom originated from Crich. Isaac's mother appears to have died either in childbirth, or shortly after Isaac's birth in 1883. By the 1891 census at least three of Isaac's sisters were living at Crich, whilst Isaac and his brother Enos were inmates of Belper Workhouse.
By the 1901 census Isaac was a farm servant at Swanwick, whilst by the 1911 census he was a farm labourer, lodging at a house at Hucknall, Notts. There is no obvious local record of a marriage, and the most likely index entry of his death is in 1959 in the Mansfield Registration District.