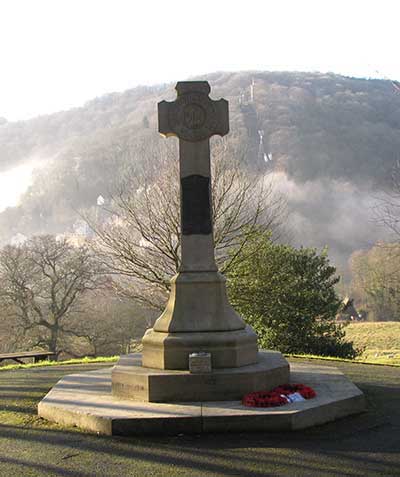 Derbyshire Courier 29 November 1919
STARKHOLMES CENOTAPH
Unveiling Ceremony by Mr FC Arkwright
A tribute to the ideal of the League of Nations was paid by Mr FC Arkwright, vice- lieutenant of Derbyshire, at the unveiling of the Starkholmes and Riber War Memorial on Sunday.
The ceremony took place in the presence of a large and reverent crowd. After drawing off the Union Jack which draped the monument, Mr Arkwright gave a short address, in the course of which he said he was proud that his own son’s name was amongst the number inscribed on the stone. These young men had sacrificed everything that was dear to them – even life itself – realising that the path of duty was the path of glory. He asked those present to pray that the League of Nations might become an accomplished fact, in order that war with all its horrors might be made impossible.
Canon JW Kewley, of Matlock, conducted the dedication service assisted by the Rev John Bradbury, JW Chippet, and H Pattison, by whom shorter addresses were given. The singing of the National Anthem of the ceremony to a close, and afterwards several beautiful wreaths were placed at the base of the monument.
The memorial, which is placed on a site given by Mr Arkwright near the school, consists of a cross of Darley Dale stone placed on three steps base of local gritstone. “Might Assails, 1914: Right Prevails, 1918,” is one of the inscriptions and another is: “Erected by the inhabitants of the villages of Starkholmes and Riber in honour of the soldiers who gave their lives for the right to liberty in the Great War of 1914-1918.”

Derbyshire Advertiser and Journal 29 November 1919
UNVEILED BY MR FC ARKWIGHT
On Sunday, the beautifully designed war memorial dedicated by the inhabitants of Starkholmes and Riber, villages adjacent to Matlock, was unveiled by Mr FC Arkwright in the presence of a large, interested and reverent assembly. The ceremony took place at 3 o’clock in the afternoon, and was attended not only by practically the whole of the residents in the two hamlets but by many others. The monument, admirably placed in a commanding position on the hillside of Starkholmes, stood out with on solid surface and sharp newly cut outlines against the western background of wooded heights clad in their winter livery of purple brown and grey. Overhead the scudding grey clouds now and again revealed a vista of blue, while the deep melancholy wailing of the autumn wind maintained a monotonous undertone to hymn and prayer. The memorial, beautifully designed by Mr J Simpson, of Matlock, is a well proportioned massive cross of Runic type, carried out under the contract of Mr JW Wildgoose by Mr Boden in Stancliffe Stone, the material of the base having been quarried at Lumshill. It faces almost due east and west. In place of ancient runes the circle of the eastern wheel of the cross bears the inscription “They gave their lives,” inside the circle are the words “Might Assails” divided by the date “1914”. Round the Western wheel run the words “For Right and Liberty,” the inner legend, separated now by the date “1918,” being “Right Prevails,” round the base of the monument is the inscription, “Erected by the inhabitants of the villages of Starkholmes and Riber in honour of soldiers who gave their lives for right and liberty in the great War of 1914-18,” while a black plaque on the eastern surface of the shaft bears, written in gold, the following names: Frederic GA Arkwright, Samuel Fox, Charles Fox, Frederick Fox, Thomas Fern, Jessie Fletcher, Samuel Growcott, Charles Joshua Knowles, Bernard Milne, Harold Pursglove, Ernest Read, Frederick Smith, William Ernest Taylor, Thomas Wherett. The site has been given by Mr Arkwright, and the cost of the memorial, £150, has been raised by public subscription. The service opened with the singing of the hymn “Fight the good fight,” Mr Fowkes giving the harmonium accompaniment, and then Mr Arkwright withdrew the Union Jack draping the cross. He was, he said, deeply sensible of the honour done him by the committee who had asked him to unveil the memorial. It stood as a great credit to the trouble taken by the committee and to the taste they had displayed. He had watched the progress of the work, and now he congratulated them on the result of their labours. Starkholmes was to be congratulated in being one of the first places in the district to complete a memorial to the heroic dead, and he attributed the fact to the energy and unamity of the committee. In other places undesirable delay had been caused by differences of opinion. A great honour was due to the architect, a local man, who designed a local memorial to the local men were given their lives for their country. He was glad the monument had taken the form of a cross, for nothing was more suitable than this symbol of the death of our Saviour. I’m not only would it remind parents and relatives of the dear ones they have lost, but it would be a remembrance to the inhabitants of all the young men of the district had done. When the ground round memorial was laid out it would be an ornament to the neighbourhood. He was proud to think his son’s name was added to the list. The names inscribed there were a link, a bond of fellowship between them all, which he hoped would last for ever. The young men in the prime of life who had gone out run the risk of losing all. They left everything dear to them at home had taken their lives in their hands realising the past to duty was the path to glory. Let’s pray that the proposed League of Nations would make war with all its horrors impossible. He had just received from the king the following letter (referring to his son): “I join with my grateful people in sending this memorial of a brave life given for others in the great War.”
The solemn dedication of the memorial was then made by the Rev Canon Kewley, and the Doxology was sung, a lesson was read by the Rev H Pattison, MA, and a short address was given by the Rev John Bradbury. Then follow the hymn “Lead kindly light,” and afterwards an address was delivered by the Rev JW Chippet, MA. The last hymn sung was “Abide with me.” Then came the concluding prayers and the singing of the National Anthem. Amongst the memorials placed at the base of the monument was the following illuminated scroll, “He whom this scroll, commemorates was numbered amongst those who were at the call of King and country, left all that was dear to them, endured hardships, faced danger, and finally passed out of the sight of men, by the path of duty and self-sacrifice giving up their own lives that others may live in freedom. Let those that come after see to it that his name be not forgotten.” Capt Frederic Geo Alleyne Arkwright, 11th Hussars and Royal Flying Corps. Several white wreaths encircled the monument, amongst them those in memory of Thos Fern, Harold Pursglove, WR Knowles, and Chas J Knowles with a comprehensive wreath sent by those at Chindras House. The chairman of the committee who have brought the erecting of the memorial to so successful conclusion is Mr Geo P Savage, the hon sec Mr Ernest Stathem, and the treasurer Mr Geo Evans, members being Messrs E Purseglove, Chas Purseglove, F Growcott, A Robinson, Geo Blaymere, Geo Ashmore, Geo Hubbard, W Hood, Chas Fern, W Statham,W Brown, P Jepson, H Jones.