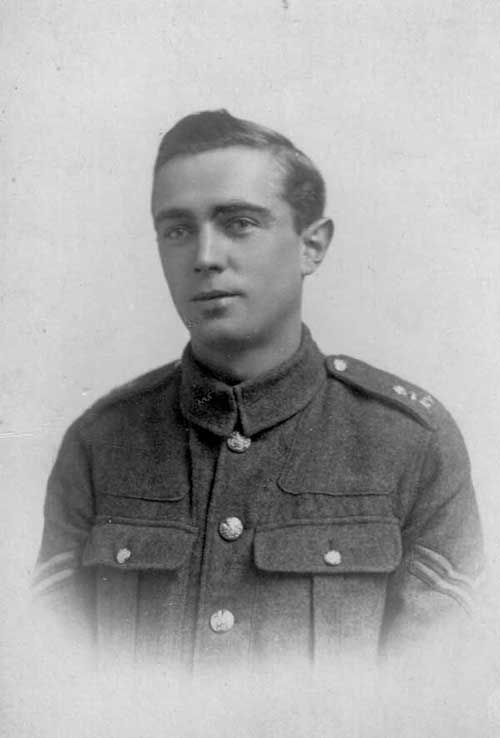 Biography
Born 10 January 1894, Norman worked as a joiner before the war. Enlisting in the Royal Fusiliers he entered France in November 1915. The Derbyshire Times dated 24th August 1918 reported him as a Prisoner of War, which he remained for nine months before repatriation. He married Iva C Paige in 1922 June qtr (Belper reg district). On the original Roll of Honour he is recorded as being a Private, however, the records indicate him to have been a Sergeant. 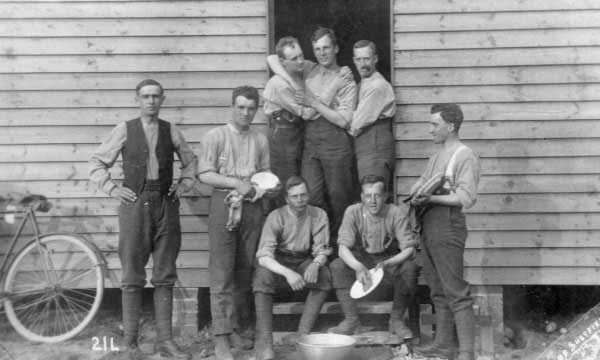 Norman Smith with others

After the war the family of Norman and Henry Victor Smith arranged for the Rood Screen to be returned and repaced in St Mary's Church in memory of their safe return. 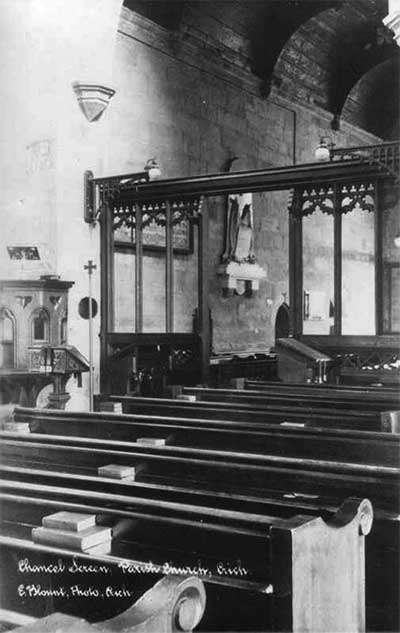 Postcard of the Rood Screen in St Mary's Church, Crich

Derbyshire Courier, 17 August 1918
CRICH SOLDIER AND TREATMENT IN GERMANY
Mr and Mrs J R Smith of Ashbourne House, Crich, who had heard nothing from their son, Sgt Norman Smith, for over three months, were greatly relieved to get news of him on Wednesday of last week. Writing from an internment camp at Kriegsfangenin, Nitsche, on 13th April, Sgt Smith says he was taken prisoner during the German push on 5 April. "I was lucky to get out of it alive," he says. A card and another letter have also been received from him, and he states that he is quite well and has no complaints to make with regard to the treatment is receiving. Sgt Smith, who has seen considerable fighting with the Royal Fusiliers, to which she was attached, crossed to France nearly three years ago. He joined the Public Schools’ Battalion on entering the army, being an old Wirksworth Grammar School boy. His youngest brother, Hy V. Smith, is in France.

Derbyshire Courier, 21 September 1918
CRICH, LEA & HOLLOWAY
Mr. and Mrs. J. R. Smith, of Roe's Lane, have had further news this week from their son. Sergt. Norman Smith, who is a prisoner of war in Germany. He states that he has come across Sgt. Edgar Drury, a young man from Matlock, and a former player in the Matlock League and well known to Crich footballers. Sergt. Smith says they are very comfortable and well treated. Pte. Frank Wass, R.D. Corps, of Whatstandwell. arrived at Crich on Wednesday from a camp in the Midlands. He is to form one of the guard at the German prisoners' camp near the Hilts Quarries at Crich, where the majority of the Germans are working.

Derbyshire Courier, 8 March 1919
Last weekend over each of the graves of the three German prisoners of war who died at the Victoria House Camp, a cross was erected. These have been made by Mr Norman Smith, of Messrs. Smith and Son, who was himself a prisoner of war in Germany for a long period. The names on the crosses are Lance Cpl Otto Gerhardt, 23, Lance Corp Franz Kamanski, 28, and Private Franz Kozub, 29. The three prisoners died during the first week in December and were victims of influenza.

Derbyshire Courier 1 April 1919
Amongst the prisoners of war home from Germany no fewer than four reached Crich during the past few days. These are Sgt Norman Smith, Roes Lane; Lance Cpl Walter Mellors, the Common; Private Abe Lichfield, Fritchley; and Private A Donaldson, the Reservoir, Chadwick Nick,. Sgt Smith was captured in April near Albert, and after six weeks work behind the lines he was moved to the N.C.O.’s camp, Parchim. Mechlinberg. The journey made in cattle trucks, with 40 in a truck, took three days, and during this time they had neither food nor water. Lance Corporal Mellors was taken prisoner on 1 July 1916, and was moved to Soltau Hanover, where he has been on farm work. His principal diet, he says, has been black bread, potatoes and water. The locality from he came was in a fearful condition from shortages of food and large numbers had died. Lance Corporal Mellors joined the first Sherwood with the first lot of Crich lads in September 1914. Along with him on Monday came Private A Lichfield, who has been a prisoner for four years and two months. They been in Germany together for a month, and came from Hanburg as companions. Sad circumstances attend the homecoming of Private Donaldson, whose wife was buried about three weeks ago.

After the war he became a well-known local businessman and involved himself fully in parish matters. He died in 1952 aged fifty-eight.

Derbyshire Times 1952
MR NORMAN SMITH
Death of Former Crich Councillor
Mr. Norman Smith (58) died on Wednesday at his home, “Penfold”, Crich. He had never fully recovered from a serious illness in November last year. He leaves a widow and one daughter. The third son of the late Mr. and Mrs. Roe Smith, of Crich, Mr. Smith was well known in Crich and district. Educated at Wirksworth Grammar School, he joined the Public Schools’ Battalion of the Royal Fusiliers on the outbreak of the Great War and served on the Western Front. For nine months he was a prisoner-of-war in Germany. On demobilisation he and his eldest brother took over their father's old established business and formed the partnership of Smith Bros., builders and contractors.
For the last 25 years he has been prominent in the public life of Crich, positions he had held at various times including Foundation member, Chairman and Treasurer of Crich Comrades Club up to the time of his death, Chairman of Crich British Legion, People's Warden at Crich Parish Church, Manager of Crich CE. Schools, Chairman of Crich Conservative Association, member of Finance and General Purposes Committee of Belper Conservative Association, Crich Parish Council, Crich Old People's Welfare Committee and Matlock and District Building Trades Employers Association.
For the last three years he had represented the Crich Division on the Derbyshire County Council, but on medical, advice did not seek re-election at the recent elections.
The funeral will be at Crich at 11a.m. tomorrow (Saturday)

Medal Card Index
He was awarded the British War, Victory and 15-Star Medals.
He entered France on 14 November 1915.
Rank of Sergeant.

Norman Smith's brother Henry Victor Smith is also on the Roll of Honour.