Biography
John was born in about 1884, the son of Crich butcher Arthur and Ann Smith. Before joining the army John Thomas worked as a joiner. In May 1917, after four months in France, he was wounded in action during the Battle of Arras, receiving a shrapnel wound to the left leg. He was in the Kitchener Australian Hospital, Brighton, for nine months where his leg was amputated. John was awarded the Silver War Badge and returned to the family home at Crich on his discharge..

Derbyshire Times, 2 June 1917
Crich Casualties
Private J. T. Smith, of the East Yorkshire Regiment, was seriously wounded in the thigh whilst in action on the Western Front on the 13th May. He is now lying at the Kitchener Australian Red Cross Hospital, Brighton, from which place he has written to his mother, Mrs Arthur Smith, of The Archway, Crich, as follows: – I should not have sent you the field card, but that I thought you would be wondering what had become of me. I had begun to think that I would not get out of here. You have no need to worry, as my leg is going on as well as it can. I was under the X-Rays, but nothing was found in. I thought I had a bad wound until I got to hospital, but then I saw many much worse. The week before I was hit we had bad luck: the place where I was billeted – a large warehouse with shells stacked outside – took fire. There were between two hundred and three hundred men in the place, and it was a rush to get out, many having neither coats nor boots on. Everything was burned. I received my wound when going to the front line whilst I was in the communication trench. ‘Fritz’ had started sending shells over and one burst just at the back of me, and a piece of the case must have hit me”.

Derbyshire Courier, 15 September 1917
CRICH CASUALTIES
Private John T Smith of Archway House, who was wounded in the leg by shrapnel several months ago, is seriously ill in Brighton Hospital. A telegram was forwarded by the matron of the institution on Wednesday to Mrs Smith to inform her that Private Smith was in a serious condition, and requesting her to go immediately if she desired to see him. It is understood that he is suffering from septic poisoning, the result of the wounds in his leg, whilst malaria has also set in. During the past few days he has undergone three operations.

Derbyshire Courier, 23 February 1918
CRICH
Private John T Smith, of Archway House, arrived home at the beginning of the week, after being in Brighton Hospital for nine months. He was wounded in the left leg and was brought to Kitchener Hospital, Brighton, where he had the limb amputated, after an unsuccessful attempt to save it. He was wounded after being in France four months. 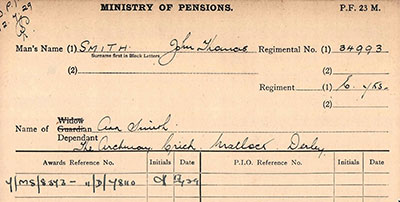