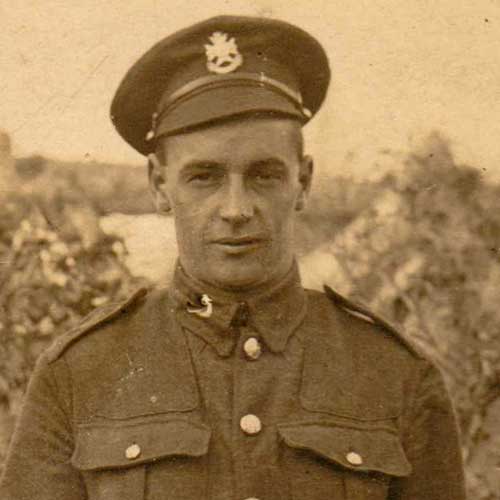 Biography
Born in 1893, Herbert worked at Ambergate wireworks. 1911 found him as a patient in Ridgeway Isolation Hospital. Herbert married Sarah Elizabeth Flint in 1912. She was the sister of Joseph Bertram Flint. and he died in 1964.

The 1918 Electoral Register shows Herbert Smith living in Crich Carr as an absent voter.
In 1939 Herbert, Sarah and sons Ronald and Reginald are living at Woodland View, Crich Carr

Herbert Smith (on the right) with two friends

Derbyshire Courier, 26 October 1918
Pte. Herbert Smith, Crich Carr writing to his parents at the Green, Fritchley, informs them that he has a wound on the hand. and is now in Blighty. He says: "A few days after this occurred an officer of the South African Infantry was brought in seriously wounded and had lost a lot of blood, so I gave him 1½pints of mine to try to save him. Last time I heard he was progressing very well."

Herbert Smith's brother Arthur Smith is also on the Roll of Honour.