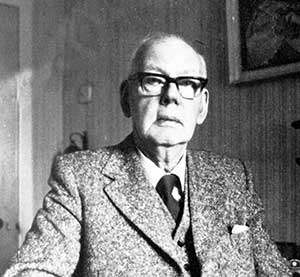 Biography
Henry Smith was a Quaker who attended the Friends' Meeting House at Fritchley. He was a conscientious objector.

The Monthly Meeting of Fritchley Friends in August 1916 reported his arrest and appearance before the Belper Bench of Magistrates with a view to his being handed over to the military authorities.

After the military representative who appeared to prosecute had stated his case, Henry Smith was invited to reply, when he read the following defence of his position:

I should like to say, first of all, that I do not wish to assume any superiority over other people who think differently, nor do I desire any personal consideration to influence the case. For I am concerned not so much with the defence of my person as with the defence of my principles, and what happens to me is of secondary importance.
I have divided my defence into three heads:-
(i) As to point of fact
I submit that I cannot be an absentee from something I have never joined. To be deemed to be enlisted cannot possibly alter the facts of the case. I might just as logically be deemed to be dead or married.
(ii) As to point of law
I submit that I am a conscientious objector recognised by the Tribunal, and as such ought to be totally exempted. (I explained to the Tribunal that non-combatant service did not meet the case.) I submit that it is contrary to the principles of British justice to punish a man who has done no wrong, and who was expressly intended by Act of Parliament to go free. And if you convict me, you will assuredly bring me into punishment; for it is against my conscience and my religion to take part in war, and I shall consequently refuse to obey all military orders. That is to say, I shall not take part, deliberately and with malice aforethought, in what I believe to be wrong.
(iii) Finally, gentlemen, my last defence is on religious grounds.
I believe that Christianity is opposed to warfare and as a Christian, very imperfect and very inexperienced it is true, yet as a Christian, I must try to follow out what I believe to be my Christian duty. It is written that the fruit of the Spirit of Christ is Love, joy, peace and other virtues, against which uthere is no law". Therefore, with all humility and supremely conscious of my own shortcomings, I would endeavour to bear witness to that Spirit, fully confident that whatever happens to me, it will prevail in the end.

When Henry Smith had given his reply, the Clerk of the Magistrates asked him for the paper and handed it to the Bench. After a few minutes deliberation, the decision was announced by the Chairman: The Bench are satisfied that Henry Smith is a bona-fide conscientious objector, holding the principles of the Society of Friends.' They declined to make any order. The Bench is aware there is a Friends Ambulance Corps and hope the defendant will volunteer for that.

The military representative was dissatisfied with the decision and requested permission to take the matter further and this was granted.

One week later Henry Smith had another call to the Colours, so that he was again liable to arrest.

Henry Smith was court-martialled three times and was finally released from prison in March 1919 on grounds of health. It had been three years since his first appeal to the County Appeal Tribunal.

Charge Sheet: The accused No 2990 Pte Henry Smith of the 5th Northern Coy, Non Combatant Corps, a soldier of the Regular Forces is charged with when on active service disobeying a lawful command given by his superior officer in that he at Avington Park Camp , Winchester, on the 21st June 1918 did not put on uniform when ordered to do so by No 207439 Cpl Manger of Southern Command Labour Corps attached to Eastern Coy Non Combatant Corps.

An offender under the Act shall not be subject to imprisonment for more than two consecutive years, whether under one or more sentences. Does not this mean that an offender under this act shall not actually undergo imprisonment for more than 2 years ... that an offender shall not be confined under guard, whether in guard room, in prison or detentopn room for more than two consecutive years. Now the time actually spent in prison by the accused is less than 2 years – namely the period from the 22 Aug 1916 to the 19th June 1918.

During August 1952 Lucy Evelyn Smith (Henry's wife) died aged 58 and was buried at the Quaker burial ground in Furnace.