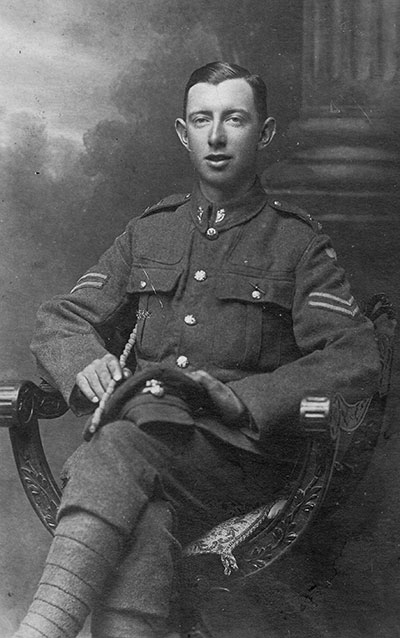 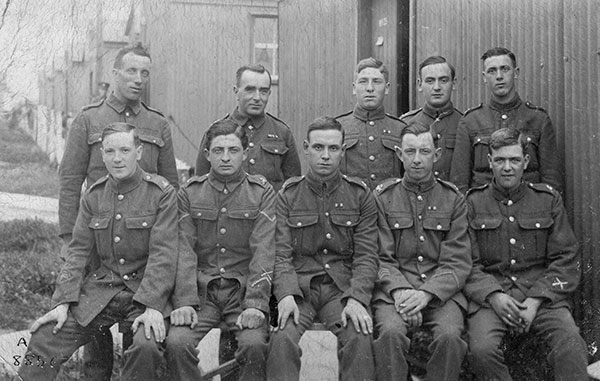 Arthur is second right on the front row.
On the back of this photograph is written: 2 August 1919, Durrington Camp, Salisbury.
On his right jacket sleeve are three overseas service chevrons

Biography
Arthur and his brother Herbert lived in Fritchley. Serving with the Northumberland Fusiliers, he was promoted to sergeant.(He was recorded as Private on the original Roll of Honour). Suffering from shell-shock, he was taken as a PoW in 1918 while defending Bullecourt, France. He was interned in Münster, Minden and Sennelager. Returning home in 1919, he married Frances Ebbern in 1924. The family later settled at Long Eaton where Arthur was employed as a shunter for the LMS Railway.

Derbyshire Times, 25 May 1918
Prisoners of War: Sgt. A Smith of the Northumberland Fusiliers from Fritchley.

Derbyshire Courier 25 May 1918
Mr and Mrs Raymond Smith of Fritchley Green, have had news that their son Sgt Arthur Smith, Northumberland Fusiliers, is in Germany. He writes to say he was captured on 21 March after a terrific bombardment by the Germans, during which he was badly affected by shell-shock. He has practically recovered from its effects. He states that there are several old pals from Belper and Ripley districts amongst those captured along with him. “I’m lucky to be alive,” he says. He has done two years fighting in France.

Derbyshire Courier, 11 January 1919
Sgt Arthur Smith, Northumberland Fusiliers of Fritchley Green, has written to his parents stating that he has landed in England. He arrived in at Hull at the beginning of the week, after being a prisoner for about 10 months. He was captured whilst suffering from shell shock, by the weekend he hopes to have reached home. 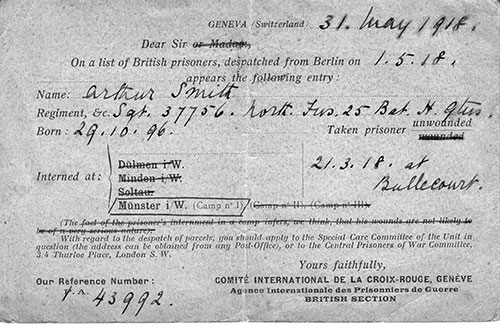