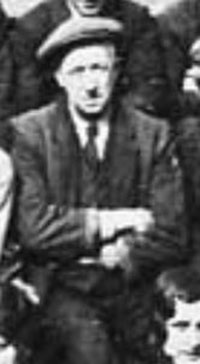 Biography
Born in 1881, Archibald worked as a wood turner for Joseph Glossop before joining the Army at Ripley in December 1915 aged thirty-four. His parents were licensees of the Shoulder of Mutton at Fritchley for many years, until his mother’s death in 1925. He entered France on SS Archangel in October 1916 and worked in the field butchery. In September 1917 he was compulsorily transferred to the Royal Irish Rifles as rifleman “in the interests of the Service”. He had several hospital admissions for boils and skin problems. In May 1918 he was transferredback to the Army Service Corps.

Derby Daily Telegraph, 6 October 1939
DIED IN WOOD
INQUEST NOT TO BE HELD ON FRITCHLEY MAN
The District Coroner Mr A. N. Whiston, has decided not to hold an inquest on Archibald Rowe (58), and unemployed labourer of 6, Greenfields, Fritchley, who collapsed and died in Chase Wood, Crich, on Tuesday afternoon.
Mr Rowe had been out collecting wood with his brother Mr Raymond Rowe, and was missed when they were returning home.
When he got no reply to his calls, Mr Raymond Rowe retraced his steps and found his brother lying in a collapsed state on the public footpath of the wood. He died about two minutes later, before the arrival of Dr Eileen MacDonald, of Crich.