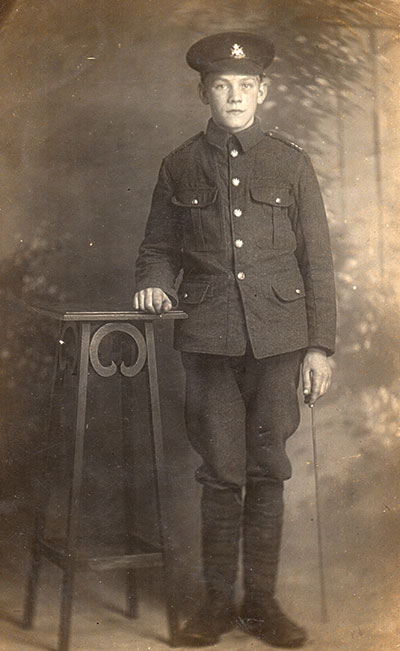 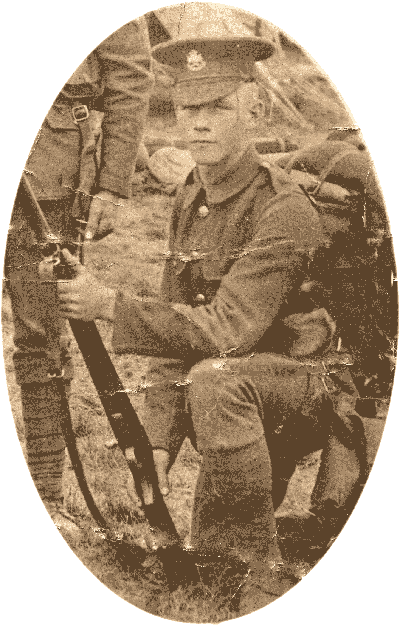 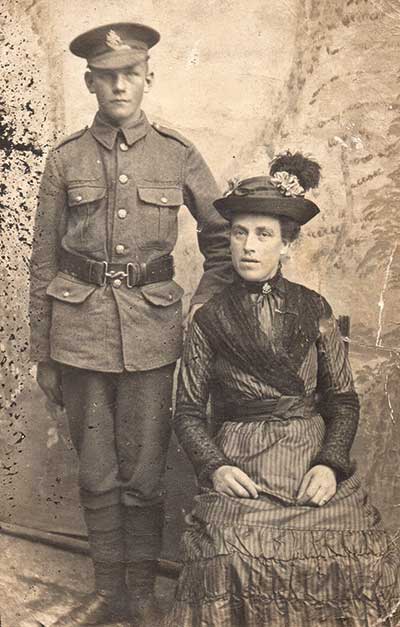 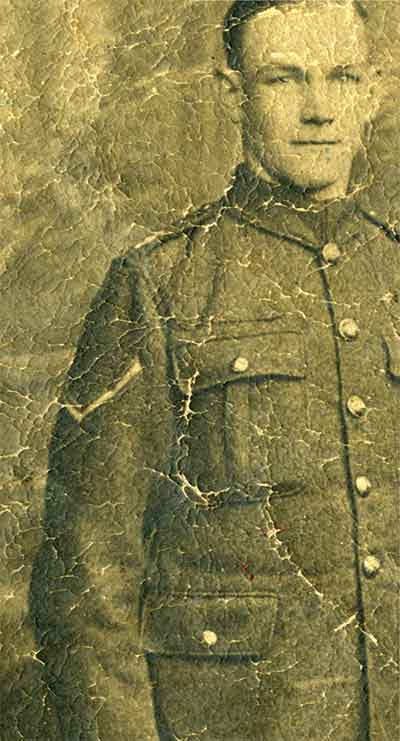 A later photograph, showing Harry wearing the Lance Corporal insignia of a single chevron on his jacket sleeve. 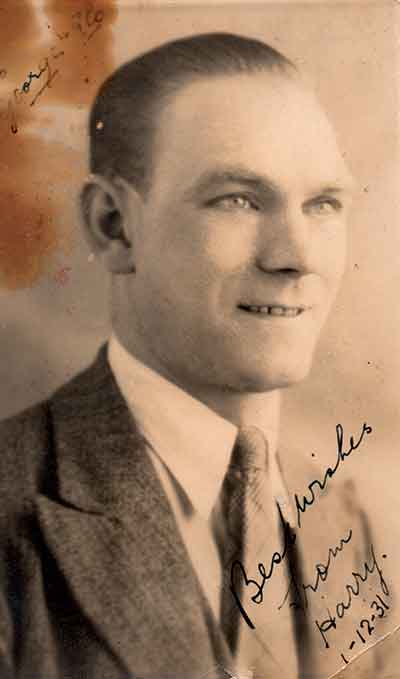 Photographs of Crich Carr C of E School, circa 1913. The photographs are mounted in a presentation wallet by Scholastic Souvenir Co Ltd, of Blackpool. George Herbert Redfern (1901-1982) of Whatstandwell is pictured third from the right on the back row (with the cross above his head)

Biography
[With thanks to Wendy Baird, Clive and Sandra Redfern ]
the 1920 'Roll of Honour' in St Mary's Curch, Crich lists 'REDFERN, L.CPL. J. HBT.' It is believed that 'Hbt.' – a contraction of Herbert – was an error when the name was added to the Roll. Herbert and Eliza Redfern (née Petts) are recorded as Whatstandwell residents on the 1918 register of electors, and are known to have had sons named Job Henry Redfern and George Herbert Redfern. Family recollections have confirmed that the older son Job Henry Redfern served in the army during the war, and a photograph survives of him in uniform with a Lance Corporal chevron on his arm. It seems therefore, that the name should have been listed on the Roll as 'REDFERN, L.CPL. J. HY.'
Job Henry Redfern – better known as Harry – was born at Carsington in Derbyshire on 29 February 1899. Part of Harry's childhood was spent at Handley Wood, near Shottle, where the Redfern family had long farming associations. By the time of the First World War the family was living at Whatstandwell. Harry's father lived at Thurlow Booth for a number of years.
The WW1 Medal Rolls Index Cards records a Harry Redfern of the Sherwood Foresters, with a rank of Lance Corporal and a regimental number of 200903. There appears to be no medal entitlement, though it does state that this man was awarded the Silver War Badge (SWB) for having been honourably discharged due to wounds or sickness. The records for the SWB state that he enlisted on 29 October 1914, and was discharged from service on 26 September 1918. It records that he didn’t serve abroad, and the date of enlistment means that he volunteered at fifteen years of age.
After his discharge from the army, Harry became connected with the stage, and from 1919 until 1933 he variously worked as property master, stage carpenter, and stage manager. In 1920 he was married at Manchester to a dancer from Scotland named Maisie Patterson. Harry became the landlord of the Cross Keys Inn at Holbrook in November 1933, though left less than a year later. Moving to live in Derby, he subsequently acquired the tenancy of four clubs in Derby during 1934–35, before finding employment locally as a machine hand, and later as a crane driver.
Harry Redfern passed away at Derby in 1972, aged seventy-three years.

Harry's army number is consistent with the 5th Battalion, so he possible went to Ireland with 2/5th in 1916. [Steve Morse]