Photos courtesy Barbara Singleton (with thanks to Alan Beardshaw) 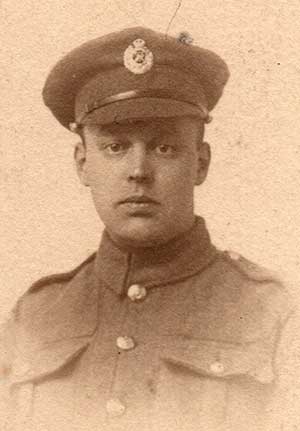 Harold when he was a Lance Corporal

Biography
Harold was born in 1885, and like his brother he worked as a railway clerk. He married Betsy Dawes 20 June 1914 at Crich. He became a sergeant during his service and returned to Crich after the war before moving to Sheffield where he continued his employment as a railway clerk.

Derbyshire Courier, 16 November 1918
CRICH, LEA, & HOLLOWAY.
Amongst the soldiers who have been at home to participate in the peace rejoicing is were Corporals Oscar Snow, of Chase Cliff Farm, and Harold J. Parkin, of Hill Top House, Crich Common. Corpl. Snow who came over on Saturday from Salonika is on his first leave since July 1915. He has seen service in France, Egypt, Salonika, and Bulgaria, and during his three years and four months fighting has escaped being wounded. He has had a malaria however on several occasions.

Derby Courier, 1 November 1919
CRICH, LEA, AND HOLLOWAY
Sergt. Harold J Parkin of Hill Top House, Fritchley, has been demobilised after over three years' service in France. He was on the clerical staff of the Midlands Railway Company at Derby at the time he joined up.

Medal Roll Index Card
He was awarded the British War and Victory Medals.

Harold Parkin's brothers Frank Parkin and George Parkin are also on the Roll of Honour.