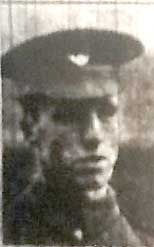 Biography
John was born at Crich in 1891 but did not live with his parents James and Maria Mellors, but with his uncle and aunt Thomas and Mary Ann Marshall. The records show that his name was recorded as Mellows. He enlisted in 1914 at Doncaster and married Hilda N Daw in the Plympton district during 1916. Entering France in May 1915 he was wounded in 1916 and then killed in action on 3rd May 1917 aged twenty-five. He was buried at Arras.

Derbyshire Courier 2 October 1915
CRICH SOLDIER'S WOUND
Mr. and Mrs. Jas. Mellors, of Royal Oak Cottages, Crich, had a field postcard on Saturday from their son, Pte John Mellors, of the King's Own Torkshire Light Infantry, informing them that he was in hospital France, the result of having been wounded. Further details came to hand on Tuesday in a letter sent from the hospital by a comrade of Private Mellors. This states : "I am writing to you on behalf of your son, who is wounded in the arm with a shrapnel bullet. The wound in not serious and he hopes to be home with ou soon, so don't worry. He is in a very good hospital and well looked after by nurese and attandants. (Signed) Pye. Hindley." Pte. Mellors has been at the front about six months. He was employed at Doncaster as a draper's traveller when war broke out and early on he joined the colours. Mr. and Mrs. Mellors have also received during the week a letter from their younger son, Pte. Walter Mellors, of the 5th Sherwood Foresters. This informed them that he was going up into line again. Pte. Mellors, who has been in hospital for three months, is a typical son of Anak, being 6ft. 3ins. in height and only attained his twentieth year on Sunday.

Note: The sons of Anak are first mentioned in Numbers 13. The Israelite leader Moses sends twelve spies representing the twelve tribes of Israel to scout out the land of Canaan, and give a full report to the congregation. The spies enter from the Negev desert and journey northward through the Judaean hills until they arrive at the brook of Eshcol near Hebron, where reside Sheshai, Ahiman, and Talmai, the sons of Anak. After the scouts have explored the entire land, they bring back samples of the fruit of the land; most notably a gigantic cluster of grapes which requires two men to carry it on a pole between them. The scouts then report to Moses and the congregation, that "the land indeed is a land flowing with milk and honey," but ten of the twelve spies discourage the Israelites from even attempting to possess the land, for they reported that the men were taller and stronger than the Israelites, and moreover the sons of Anak dwell in the land, and that they felt like grasshoppers in their presence. (source Wikipedia)

Derbyshire Times 2 June 1917
CRICH CASUALTIES
Mr and Mrs James Mellors of Crich have received news of the death of their second son, Pte John Mellors, of the King’s Yorkshire Light Infantry, who was killed in action on the 3rd of May. He was wounded 13 months ago in France, and had seen much fighting. He had enlisted at the beginning of the War, while at Doncaster. He was 25 years of age and married. The deceased’s brother Cprl. Walter Mellors, of The Sherwoods, who enlisted at the same time is now a prisoner of war in Germany.

Derbyshire Courier June 1917
CRICH CASUALIES
Mr and Mrs James Mellors of the Common, Crich, received new on Whit-Monday that their second son Private John Mellors KOYLI has been killed. The news came from Mr T. Marshall of Nottingham with whom Private Mellors was living before the war. Mr Marshall wrote as folows : – " I am sorry to tell you that we have had bad news this morning that Jacky was killed in action on 3 May. We do not know any details at present." Private Mellors who was 25 years of age enlisted at the beginning of the war, and was wounded over a year ago. His younger brother Lance-Corporal Walter Mellors, has been a Prisoner of War in Germany for nearly twelve months. Before joining the Army Private Mellors was employed as a traveller for a Nottingham drapery firm.

Belper News , 15 June 1917
CRICH SOLDIERS DEATH
With reference to the death at the front of Private John Mellors, Mrs James Mellors, of Crich, has since received the following note from the officer: – "It is with great regret and heartfelt sympathy that I have to inform you that your son was killed in action on May 3. These are hard days, especially for our mothers and wives at home, but it must be consolation to you to know that your son was a gallant fellow and died like a true soldier. He was beloved by all the men, though he had been with us only a short time. He was killed instantly, so did not suffer."

Medal Roll Index Card
John Mellows was awarded the Victory, British War and 15 Star Medals.
He entered France 21/05/15 and was killed in action. 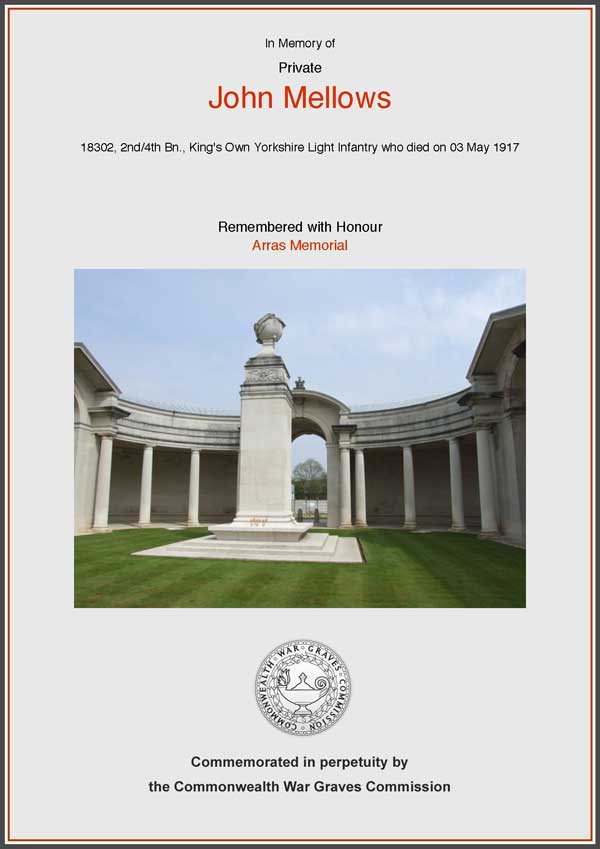 John's brother Walter Mellors is also on the Roll of Honour