Biography
John was born in 1897 and worked as a ganger in the coal mines. He enlisted in February 1915, and was posted to France the following November. He suffered greatly during the war. Frostbite in 1916 resulted in some toes being amputated, and later, when operating a Lewis gun in the trenches, he was wounded by a shell, resulting in a leg being amputated and other life-changing injuries. He was discharged in 1919. 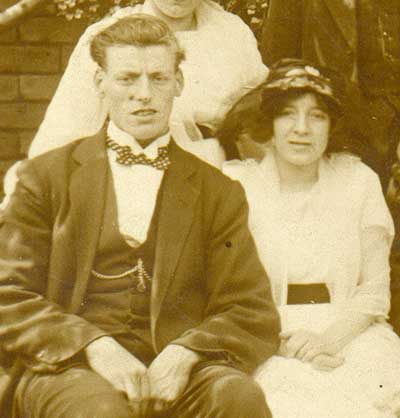 [Family Notes: Prunella Bradshaw]
Here is his account to the Medical Board of how he was injured :-
"I was wounded whilst firing a gun in the front line trenches. A shell burst wounding me in both legs, left hand and face on 27/3/1918. I was taken to CCS the same day where my right leg was amputated."
John Martin suffered greatly during the war. He had his right leg amputated, lost toes and fingers, had trench foot and frost bite plus wounds to his wrist, side, face and left leg.

Service Record
Enlisted at Somercotes aged 18. A Wesleyan (also recorded as C of E). Next of kin was his father at 7 Mill Yard, Somercotes. Height 5ft 7½ Worked for the Butterley Company as a miner.

During his various treatments he was at Victoria Auxiliary Hospital, Stratford; Lancaster House Red Cross Hospital for limbless soldiers and sailors. On one record sheet his rank is Corporal although Private on all other records. His character was recorded as very good. A note stated: whilst operating Lewis Gun in trenches was wounded by shell; both legs, left hand and face. Has also suffered from frostbite in 1916 resulting in amputation of third toe of left foot.

John Martin's brother Alfred Martin is also on the Roll of Honour.