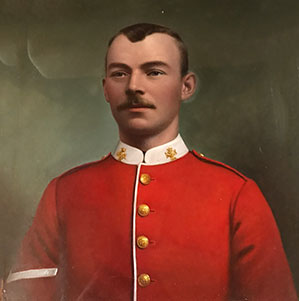 Edwardian-era photograph of John Litchfield wearing the scarlet tunic of the Sherwood Foresters.
A single chevron on his sleeve denotes his rank as lance corporal. 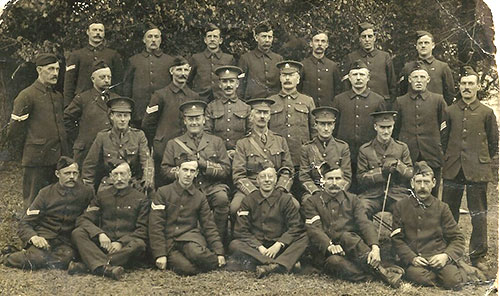 Early WW1 photograph featuring a newly-created service battalion of the Sherwood Foresters.
John Litchfield is on the back row third left.

Biography
John Litchfield was born at Crich in 1874. He attested for service with the militia in 1897, serving with the 3rd Battalion of the Sherwood Foresters (Derbyshire Regiment). An Edwardian-era photograph of John in uniform shows him wearing the rank insignia of a lance corporal. He married Frances Burton in 1909 and was employed as a railway servant, spending time working as a porter. During the First World War, he enlisted in the Sherwood Foresters on 22 September 1914 – at the age of forty – and served in Kitchener's Army.

An early WW1 photograph featuring John Litchfield shows a newly-created service battalion of the Sherwood Foresters. In common with most of these service battalions, there was a distinct lack of equipment; uniforms were slow to arrive, being temporarily replaced with civilian clothes, and then with blue serge uniforms that looked distinctly unsoldierly. The men in this photograph are clearly wearing these blue serge uniforms, rather than khaki. These 'emergency' uniforms were known as 'Kitchener's Blue'. Given the relatively advanced age of many of these men, it is likely that many (like John) are former soldiers used to train the other men with no military experience.

John was later transferred to the Royal Engineers, working on the railways. He was discharged through sickness in June 1916; he didn't see active service abroad. On the Roll of Honour inside Crich Parish Church, John's rank has been given as 'lance corporal', though this was his pre-WW1 rank with the Sherwoods. He served as a private soldier during WW1, latterly with the rank of 'sapper' during service with the Royal Engineers.
After the war, he returned to his family at Crich and worked for many years as a railway shunter. He passed away in 1947, aged seventy-three years.

John Litchfield's brother Abraham Litchfield is also on the Roll of Honour.