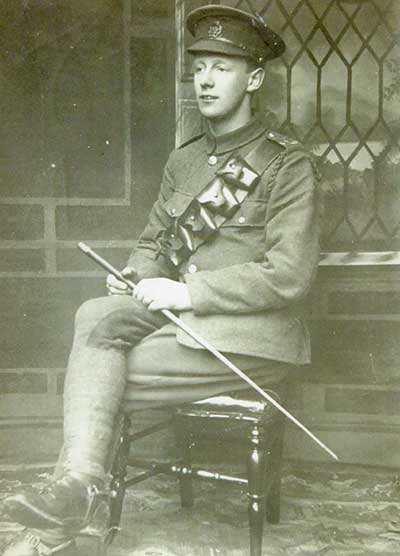 Biography
Gerald Needham Albarn, born in 1890 at Crich, became the adopted son of John and Emily Kneebone and was then known as Gerald Kneebone. He attested at Derby in November 1915, a twenty-five year old grocer living at Tor View, Crich. In December 1916 he was transferred from the Derbyshire Yeomanry into the Sherwood Foresters, entering France a few days later. In November 1917 he was awarded a good conduct badge and was demobbed to Lodge Hall Farm, Wingfield Park in February 1919. Gerald married Ellen Shelton at Pentrich in December 1916.

Ripley and Heanor News 15 December 1916
The marriage was solemnised at Pentrich Church last Thursday between Trooper Gerald KNEEBONE, of Crich, of the Derbyshire Yeomanry and Miss Nellie SHELTON, youngest daughter of Mr R SHELTON, of Lodge Hill Farm. The bridegroom, who is in training in County Cork, and is expecting shortly to go out to France was in civil life manager at the Loscoe branch of the Co-operative Society.