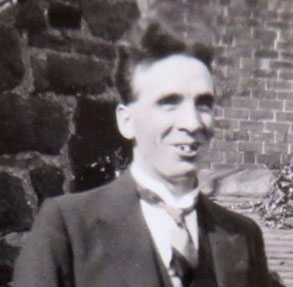 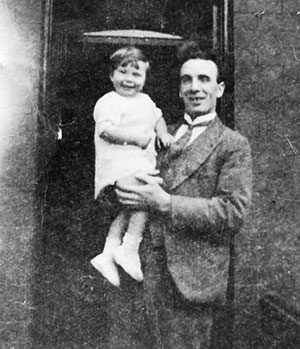 James with his daughter Beryl c1927

Biography
James was born on Cowper Lane, Crich, and was employed at the Heage branch store of the Ripley Co-operative Society. Entering France in April 1918, he was taken as a PoW at Coury in the following May and interned at Friedrichsfield.
He married Ethel Snowball in 1923 and lived on Birches Lane, South Wingfield.

Derbyshire Courier, 5 October 1918
Private James Key, Lincolns, son of Mr and Mrs George Key, the Common, has written a home to say he is a prisoner of war. He had been missing for 17 weeks. Writing on 11 June from Friedrichsfeld Vei Wesen, Private Key says that the supply of food given to them was at first bad but it improved later. "We are not bullied about at all," he says. Before joining up he was in the Heage branch of the Ripley Cooporative Society stores. He crossed to France last April.

Derbyshire Courier, 14 December 1918
Several local soldiers who have been prisoners of war in Germany have returned home during the week. They include Lance Corporal Charles Walters, Leicesters, of Fold yard, Crich, who has had six months in captivity; Gunner Jesse Barrett, of Kirkham Lane, Fritchley, who arrived on Monday; Private James Kay was taken prisoner last May, who arrived on Wednesday; and a Private Brown of the Green Fritchley.