Biography
Arthur, born in Crich in 1886, was the son of Thomas and Elizabeth Haslam. He enlisted in the Royal Navy in 1904 and was discharged after a few months, so he joined the militia before attesting in the regular army at Derby on 24th February 1905 aged eighteen, a fitter’s labourer and Wesleyan. He was serving with the 3rd Notts and Derby militia. He moved to Manchester where he became a mechanic and married Annie Fullaway in the September quarter of 1914
Arthur was with the Expeditionary Force from August 1914 until March 1915, when he returned to the UK before being posted to Salonika. In May 1916 he was invalided home aboard HS Formosa after suffering from concussion of the brain; he was awarded the Silver War Badge as well as the Clasp and Roses (which was given to those who qualified for the 1914 Star and who served “under fire”). Some time after demob Arthur and his wife moved to Coventry. 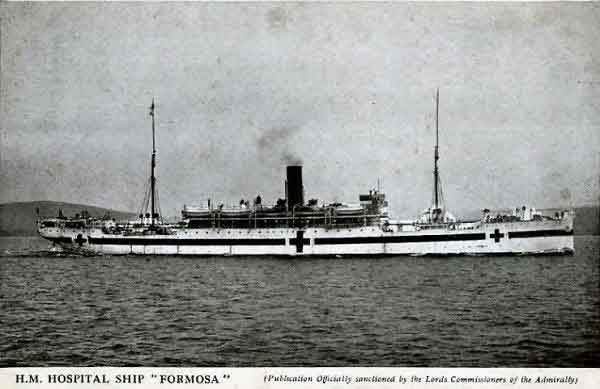 The French liner "Formosa" was commissioned as a Hospital Ship on 23rd June, 1915 with accommodation for 417 patients.
She served until 7th July 1919.

Medal Roll Index Card
Driver in Base Dept (H T & S) A.S.C. T/22861
He was awarded the British War, Victory, 14-Star Medals and C&R. He also received the Silver War Badge.
[Clasp to the 1914 Star: A bar clasp inscribed "5 Aug. to 22 Nov. 1914" was given to all those who qualified for the 1914 Star and who served under fire. Since the same ribbon is used with the 1914-15 Star, holders of the 1914 Star were permitted to wear a small silver rosette on their ribbon when the decoration itself is not worn. On the medal index cards this is usually noted as the "Clasp and Roses" or "C&R". It was necessary to apply for the issue of the clasp.]

Army Service Record
Attested at Derby on 24 February 1905 aged 18 years and 5 months, a fitter's labourer born in Crich; a Wesleyan. He was serving with the 3rd Notts & Derby militia. His height was 5ft 2½in; weight 122lb; grey eyes and brown hair; several tattoo marks in red on left forearm; many scars of burns on left hip; round scar centre of back and on back of head. Father Thomas Haslam, King Street, Belper

There was correspondence in his record as to confirmation of his rank. It seems he was appointed to Corporal as confirmed in a letter dated 19th July 1916.

T/22861 a/Cpl Haslam.A
There is no record in this office of this man having been appointed a/Cpl:- Please give a reference to Part II orders in which the appointment was published.

T/22861 Driver Haslam A
With reference to the reversion of the above named from a/Corpl. on 1/4/16 on admission to hospital, the Colonel i/c A.S.C. Records Woolwich informs me that he has no record of his appointment a/Corpl.
Will you please furnish number and date of Part II orders in which the appaointment was published.
11/7/1916

To Officer i/c A.S.C. Section, A.G.'s Office at the Base, G.H.Q, E.E.F
This N.C.O. was a lance Coprl in the 2nd Divn. Trains who were in France at the commencement of the war, and was appointed Corporal at a time when a number of N.C.O.'s were given a higher rank and sent back to England in March 1915
I am unable to give further information as this N.C.O. was invalided to England on 29-3-16
This N.C.O. was posted to this Unit, upon the formation of No. 2 Reserve H.T. Depot, Blackheath
J. Cuthbertson (Lieut & Adjt. No 3 Base Horse Transport Dept) Salonica 19-7-16

After the war Arthur was living in Coventry and wished to join the Old
Contemptibles. The following correspondence was with his army record –

Spring Rd, Coventry, Warks, 19-5-38
Dear Sirs
Please find enclosed my old army discharge papers I want to join the Coventry Branch of the
Old Contemptables and I have not yet got a clasp for my Mons Star Medal. Will you kindly
look into the same for me
Yours faithfully, Arthur Haslam

25/5/1938 T/22861 Dvr Haslam, A residing at Yew Tree Farm, Wheatcroft is eligible for the
British War, Victory and 1914 star Roll No. 5. Also confirmation of eligibility for the Clasp
and Roses.

By registered post 8 July 1938
Sir,
With reference to your letter of 19th May, I am directed to inform you, for the purposes of
an application to the old Contemptibles Association, that according to the records of the
Department No T.22861, driver Arthur Haslam, Royal Army Service Corps, was awarded the
1914 Star and Clasp and the British War and Victory Medals in respect of his services during
the Great War.
It has been ascertained from the General Secretary that this letter will meet the requirements
of the Association.
The enclosure to your letter (Army form B2067) is returned here with
I am, Sir,