Biography
Thomas was a collier at Oakerthorpe. In 1913 he immigrated to Canada with his family settling at Glen Williams, Ontario from where he enlisted into the Canadian Expeditionary Force during September 1915. He was an unmarried miner. He arrived in England in 1916 and 1918 received a gunshot wound to the right shoulder – he was promoted to sergeant later that year. He died in the USA – his memorial stone is at Halton Hills Cemetery, Ontario. 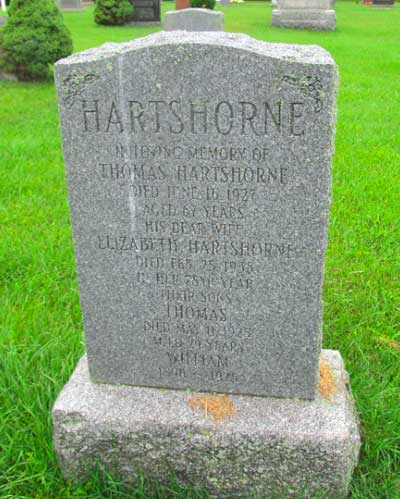 This headstone is located in Glen Williams Cemetery at Halton Hills, Ontario, Canada. It commemorates members of the Hartshorne family from Crich, who immigrated to Canada shortly before the start of the First World War. The senior Thomas Hartshorne (1858-1927) and his third wife, Elizabeth McFarlane (c1859-1938), immigrated to Canada in 1913 along with three sons and two daughters. An older son of Thomas – John Isaac (Jack) Hartshorne – had immigrated to Canada the previous year, though he returned to live in England following the war. Thomas Hartshorne (1895-1925) and William McFarlane Hartshorne (1898-1935) both served with the Canadian Expeditionary Force (CEF) during the First World War and are commemorated on the Roll of Honour inside Crich Parish Church, along with their older brother, Jack, who also served with the CEF. As Thomas and William both passed away in America, it is possible that they are not interred in this grave, despite their names being commemorated on the memorial. The headstone contains an error: the year of death for William Hartshorne should read '1935', not 1925.
[Thanks to Simon Johnson]

Canadian Attestation Paper:
Thomas Harshorne; born in Crich, Derbyshire 31 Aug 1895, an unmarried miner by trade. His next of kin was Mrs Thomas Hartshorne of Glenwilliams, Ontario. Canada. In the Active Militia. Dated 15 Sep 1915

Newspaper Report
Derbyshire Times 16 March 1918
CRICH SOLDIER WOUNDED
News has been received at Crich that Mr Thomas Hartshorne Junior, who went to Canada four years ago, and who enlisted in the Canadian Forces when war broke out, has been in France over a year is now in hospital at Shrewsbury suffering from the effects of a serious wound on the shoulders. He is single about 25 years of age and previous to going to Canada was employed at the Oakerthorpe Colliery.