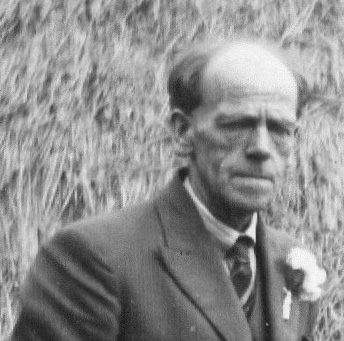 Biography
Ernest Harrison was born at Crich in 1885 and worked for the Butterley Company prior to the war. When he enlisted in the army in November 1914, he was living in Sheffield. He had relocated to Liverpool by 1917. He married twice, to sisters. He married Jane Garnett in 1917. Jane died the following year as the result of a domestic accident, aged 38. Later that year, Ernest married Jane's younger sister, Ellen Garnett. Ernest and Ellen had two sons: Albert Mansel Harrison (1918) and Sydney Harrison (1920). Ellen passed away in 1926, aged 45. Ernest subsequently had a son named Eric with his partner, Lilian Langston. He remained in Liverpool until his death in 1948..

Derbyshire Advertiser, 20th February 1915
FOUR SONS WITH THE COLOURS
Crich figures amongst the list of Rural Parishes that has sent four sons from one family to serve with the colours. This proud distinction is claimed by Mr and Mrs Harrison of Roes Lane Crich who will have four sons in his Majesty's forces. Gunner Herbert Harrison is with the 4th Coy. Royal Field Artillery, at Swanage, Pte William Harrison another brother having been at the front since Sept. serving with the 2nd Battalion Sherwood Foresters, the third son Gunner Ernest Harrison is station at Sheerness, being attached to the 22nd Coy Ravelin Battery, Royal Garrison Artillery, whilst the youngest son Pte. Arthur Harrison is serving with the 5th Bttn. Sherwood Foresters, at present stationed at Hoddesdon, Herts.

His brother William was wounded in 1915; reported in the Derbyshire Courier. Ernest was also mentioned in the report:

Derbyshire Courier, 31 August 1915
Crich Lance Corporal Wounded
Lance Corporal William Harrison of Crich, attached to the 2nd Notts and Derbyshire Regiment, in writing home during the past few days tell of his getting wounded in action.
He is now at the Heaton Mersey Auxiliary Hospital (formerly a Wesleyan School) and he writes: "I am feeling very sore after my experiences in the last big battle. The sights of the war get worse, and to see the dead and dying is awful. The battle started about 2.45 on Monday, and the noise of hundreds of guns was absolutely deafening. Our order to advance was smartly obeyed, but we had great difficulty in getting along as every yard or so we went some of our chaps were knocked down. Thousands of shells were dropping round us, but it did not matter we kept going on and gained for our commander what he wanted. Then I was struck by pieces of shell, one in the arm two in the thigh and again in the abdomen. But I’m feeling a bit better now, and we are being very well looked after in hospital. Just as we were going into action I saw Sam Britton, Jack Clark, Walter Mellors and others who shouted to me and wished us look."
Lance Corporal Harrison came across with 200 other wounded soldiers in the –, and was sent to Ducie Avenue Hospital. Manchester, afterwards being moved to Heaton Mersey. His brother Private E Harrison of the East Surrey Light Infantry, was expected to start for the Dardanelles on Tuesday.

Derbyshire Courier, 5 February 1916
CRICH CASUALTIES
Mr and Mrs William Harrison, of Roes Lane, Crich, have received news that their son, Private Ernest Harrison, of the East Surreys, is ill in hospital at Le Havre, France. No further details are yet to hand. Private E. Harrison was for a period in the Royal Garrison Artillery, but was later transferred to the East Surreys. His brother William of the 1st Sherwood's, is still in hospital at Stretford, Manchester, suffering from severe shrapnel wounds sustained in France some months ago. Recently he underwent an operation at the Manchester Infirmary, when he had some pieces of shrapnel removed.
Another Crich soldier who is ill in hospital is Sgt William Curzon, news having been received recently by his mother to this effect. Sgt Curzon who is in the 5th Sherwood Forester's, stationed somewhere in the south of France, states in his letter that he has been bitten in the eye by a venomous insect whilst he was asleep.