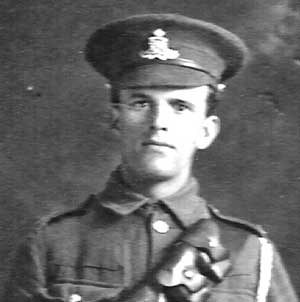 Biography
John Gough was born at Thurlow Booth, Crich in 1892, the son of John Henry and Sarah Ann Gough; he worked at Dawbarn’s joinery works, Whatstandwell . John was in the Royal Field Artillery and entered France in 1915 aged twenty-three. He was killed in action on 4th May 1917 and is buried at Bucquoy Road Cemetery, Ficheux. 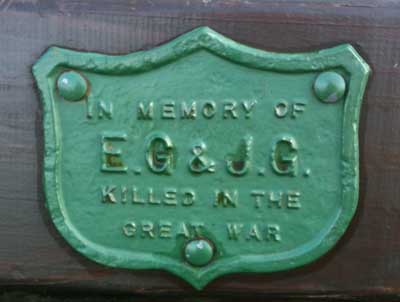 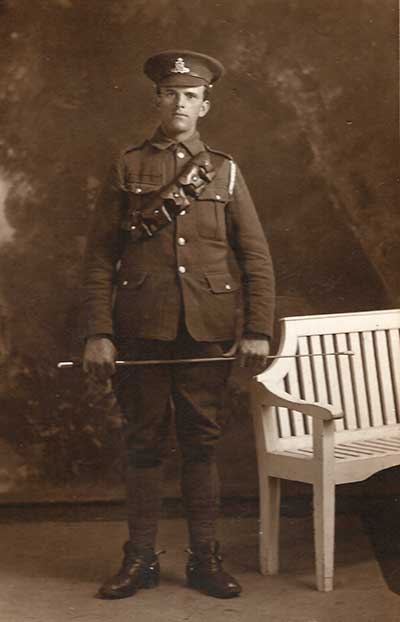 Mr and Mrs Jno Hy Gough, who lately left Crich Parish to live at Belper, received the sad news on Saturday last that their son Gunner John Gough (R.F.A.) was killed in action. He has been two years in France is 24 years of age, single and previous to enlisting worked at Messrs Yalverton Dawbarns, Whatstandwell.

Medal Index Record
He was awarded the Victory, British War and 15 Star Medals 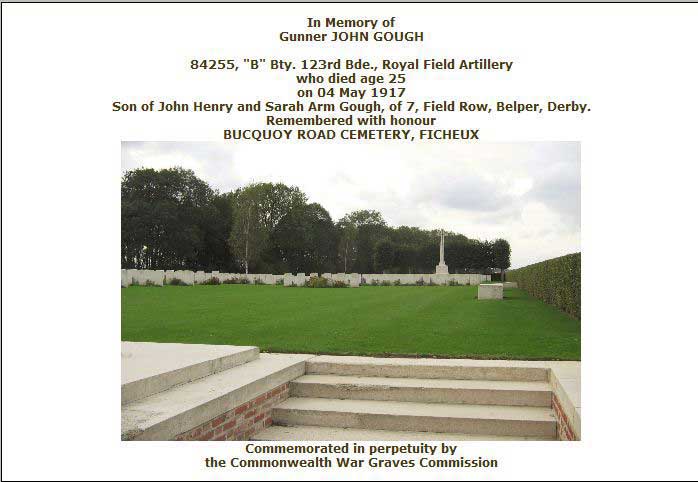 Crich Front Lines memorial event
The following song by Martyn Offord was sung, to the tune "The Trees they Grow so High", at the November 2014 Crich Front Lines memorial event in the Glebe Field Centre in honour of John Gough and Ernest Gregory. The words imagins John and Ernest dreaming of this view in their last terrible moments from the seat bearing their initials overlooking the wonderful view from Coddington.

From the bench at Coddington

They sat upon a wooden bench and viewed the scene all round,
The sun was sat upon the hills and the mist upon the ground,
Blue shadows spread along the scarp where the woods were still and brown,
And the two sat side by side remembering.

John Gough he watched the sheep below, his eyes were glazed and wide;
In the dressing camp of the Seventh Corps I lay and quietly cried,
Cried for this place as I drifted off that night in May I died.
And the two sat side by side remembering.

On the Bocquoy Road there were no dales, no lambs, no cottage fires,
Just stumps of trees like splintered teeth, craters and tangled wires,
A churned up plain of endless mud stretched to Arras’s ruined spires,
And the two sat side by side remembering.

There’s a canal as well where I was killed, Ernest Gregory softly said
Where our heavy guns pounded the Huns until they up and fled
And the Ozzies charged through rain and fog and the waters ran blood red
And the two sat side by side remembering.

The victory ours by Bellenglise through shell holes, slime and rain,
Down muddy slopes through sap and lane we had him on the run,
But we went too far, our flank exposed, and ran into his guns
And the two sat side by side remembering.

They sat upon the wooden bench and the trees were all in bud,
This was the scene they dreamed about as their eyes filled up with blood,
Blue shadows spread along the scarp where they lay face down in the mud
And the two sat side by side remembering