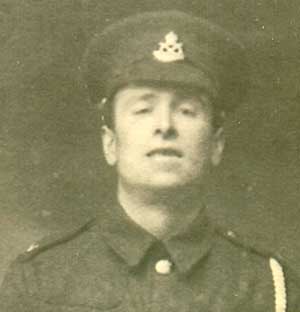 Biography
William attested at Derby in October 1916 aged thirty-five, listed as married and working as a mason for the Haynes Brothers in Crich. His parents were William and Sarah Gaunt, although his father died when he was about ten years old. William married Emma Elizabeth Cooper in 1905 at Nether Heage and they had a son, Robert William, born in 1911. He was awarded compassionate leave in February 1918 as his son was seriously ill. Shortly after his return to the regiment he was captured at Messines (on 11 March 1918) and became a prisoner of war in Stendal Camp, joining Alex Donaldson, who had been captured shortly before . He was repatriated on SS Porto in November 1918. 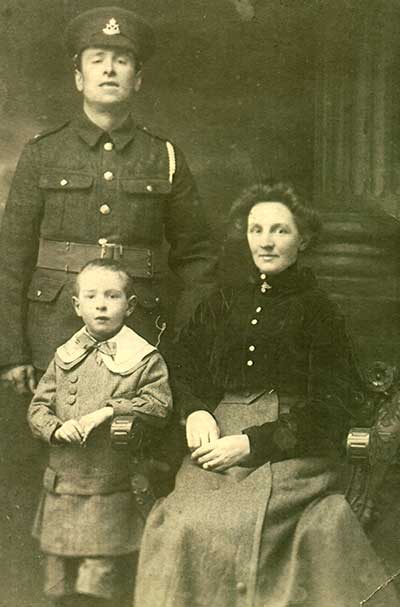 Derbyshire Courier , 1 June 1918
News has been received from Private William Gaunt, South Staffords, that he is a prisoner of war in Germany. Nothing had been received from him since 8 April, and last week the War Office informed his wife, who is now at Nether Heage, that he was missing. A day or so previous to this, however, Private Gaunt’s card stating that he was at Limburg Larhn, had come to hand. His cousin, Private James Butler of Crich, was interned at the same place; he was taken prisoner in September 1914. Before being called up Private Gaunt was at Cowper Lane Farm, Crich.

Derbyshire Courier 30 November 1918
Mrs S. GAUNT, of Common, Crich, had you on Saturday that her eldest son,PTE William GAUNT , had arrived at Hull from Rotterdam on 21 November. He afterwards left for Ripon, and expects to be home this week.Pte GAUNT was taken prisoner by the Germans last April. In his letter to his wife, now at Heage, he says that he is quite well.

Note: The Stendal POW camp, which is about 125 km west of Berlin, was one of the first POW camps built by the Germans. The PoW uniform, supplied by the Red Cross, was black with brown stripes down the legs and a brown insert in the sleeves of the jacket. Food at the camp consisted of black bread and soup. The men depended on packages from home and from the Red Cross for additional food, money, and supplies. A new arrival at camp would be paired up with someone who had been at the camp for a while and they would share their parcels until the new arrival began to receive packages.
Prisoners also performed labour both inside and outside of the camp; some were billeted with farm families. More unfortunate prisoners would be sent to work in the salt mines. To keep the men occupied the camp organised concerts, a debating club, orchestras, plays and sports teams. After the Armistice took affect on November 11, 1918, the camp was visited by Canadian officers who arranged for the transportation of the men back home.
Reference: http://www.cityssm.on.ca/library/WW1_POW.html