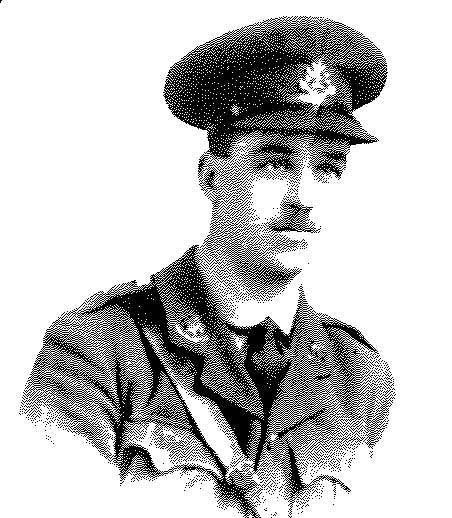 Biography
William joined the Royal Fusiliers as a Private in September 1914 and in January 1915 was commissioned as an officer into the Sherwood Foresters. He was killed in action on 3rd January 1918, aged twenty-four, when he was the officer commanding “D” Coy, 17th Battalion, Sherwood Foresters. He is buried at Vlamertinghe New Military Cemetery. He had married Ada Kay during 1916 (she was sister to Len Kay).
In his book ‘The Bath at War’ Charles Beresford made the following observations about William – he was well-known in Matlock Bath as he worked at Parr’s Bank on the Parade. William had joined the Public Schools battalion on the 15th September 1914 and was commissioned to the 10th Sherwood Foresters some four months later. On New Year’s Eve he was attached to the 17th Sherwood Foresters in the Ypres area. The battalion’s War Diary described everything as being quiet. It was snowing and the Germans could be heard singing. The 17th were due to be relieved by the 16th Foresters on the 3rd January 1918 but it was on this day that William was shot in the head by a German sniper and died instantly. He was just twenty-four years old and had been married but a year. The War Office telegram was sent to William’s parents –“To Else, Park Lodge, Fritchley. Derby. Deeply regret to inform you Lieut W E Else Sherwood Foresters was killed in action January third The Army Council express their sympathy”. William was an acting Captain when he was killed and although he was recommended for a Military Cross this was not awarded.

The inhabitants of Crich and Fritchley were greatly grieved when they received the sad news that Lieutenant William E. Else of the Sherwood Foresters, son of Coun. Charles J. Else of The Lodge Fritchley had been killed in action on the Western Front on the 3rd inst. Lieutenant Else joined the Army in September 1914 as a private and he was promoted second lieutenant in February 1915, apparently he was promoted whilst in France to the rank of lieutenant. He was over in December 1917 on 14 days leave. The late Mr Else was 24 years of age. He was educated at Dartford Grammar and Derby Schools, and afterwards was engaged on the staff at Parr’s Bank, Matlock. On the declaration of war he was one of the most enthusiastic in the district in encouraging recruits for the Army. On December 13th 1916 he married Miss Ada Evelyn Kay, daughter of Mr A. Kay the manager of Messrs Richard Johnson and Nephew’s wire mill at Ambergate.

Derbyshire Courier, 19 January 1918
FRITCHLEY LIEUTENANT’S DEATH
Striking Tributes by Brother Officers
Mrs W E Else, of West Leigh, the Chase, has received since our last issue full particulars of how her husband Lieutenant Wm. E. Else, made the supreme sacrifice. From Lieutenant Reece, Sherwood Foresters, the following letter was received: – "I write to tell you of our great appreciation of the loss to us by the passing of Lieutenant Else, and to send you our united sympathy and our congratulations on his splendid behaviour and services. He was shot through the head during a small action in which he took a brave part, and I remember hearing him say that he would stay at the place till he saw the affair through. He died quite quickly, and by his departure we have all lost a good officer, excellent work and play and staunch companion."
Fully endorsing the fine qualities attributed to Lieutenant Else in the foregoing was a letter written by Lieutenant-Colonel J A Methuen, the commanding officer as follows: – "I am very sorry to say your husband was killed last night. We all miss him terribly: he was loved by everyone in the battalion: a splendid soldier with an excellent record, a first-class sportsman, and a thorough gentleman. He was shot through the head and never suffered the slightest pain. Only the day before he had done very good work and captured a prisoner. Please accept my deepest sympathy and may God bless you in your time of sorrow."
The same officer had complimented Lieutenant Else on his work, for amongst the papers found on him, and afterwards sent whole, was one from Lieutenant-Colonel Methuen, which had been sent up the line and received by Lieutenant Else shortly before he fell in action. This read: "I congratulate you on your success in capturing the first German prisoner this year."
A further letter written on Thursday sent by a brother officer of the Sherwoods to Mrs Else stated: "I have deferred writing to you to say how very sorry I am about the death of your husband until I have seen him buried. We wanted to bury him some little way behind the lines so laid him to rest yesterday in the military cemetery at Vlamentighe, a place about four miles from Ypres. As one who was with him all the time he was in France, I feel is death very keenly indeed. We had always been together, being the only two officers of our company who came through 31st July. He was extremely popular with the men, especially on account of his taking such an interest in all the sports, and I'm sure I'm speaking for the whole company when I say that we one and all sympathise most deeply with you in your great loss. Yours very sincerely, M A Ellison."
Letters in similar terms have been received from various officers by Mr C J Else, of Park Lodge, deceased's father.
At the St Andrews Church, Ambergate, where the deceased was married just over a year ago a requiem service was held on Sunday at 8, and a memorial service, at which a crowded congregation assembled, was held later. Both were conducted by the Rev H Eardley Field, who paid a high tribute to the memory of Lieutenant Else, and based his address on, "Wist he not that I must be about My Father's business"

High Peak News, 19 January 1918
MATLOCK BATH
Official intimation has been received of the death in action in France of Lieut. William Else of “Westleigh,” Ambergate. He belonged to a well-known and highly respected Ambergate family, and was only 24 years of age. His young widow, for whom much sympathy will be felt, was formerly a Miss A. Kay, of Ambergate, and she is at present assisting in the work at the War Pensions Department at Derby. She has received a letter from the Colonel of Lieut. Else’s regiment stating that her husband was shot through the head, and that death was instantaneous. The sad circumstance is that the late lieutenant Else was home on leave only three weeks or a month ago. He will be remembered here as one of the staff of Parr’s Bank.

Charles Beresford in his book "The Bath at War" wrote about the death of William Else. He noted that he was well-known in Matlock Bath as he worked at Parr's Bank on the Parade. William had joined the Public Schools battalion on the 15th September 1914 and was commissioned to the 10th Sherwood Foresters some four months later. On New Years Eve he was attached to the 17th Sherwood Foresters in the Ypres area. The battalions's War Diary described everything as being quiet. It was snowing and the Germans could be heard singing. The 17th were due to be relieved by the 16th Foresters on the 3rd January 1918 but it was on this day that William was shot in the head by a German sniper and died instantly. He was just twenty-four years old and married but a year. The War Office telegram was sent to William's parents
"To Else, Park Lodge, Fritchley. Derby.
Deeply regret to inform you Lieut W E Else Sherwood Foresters was killed in action January third The Army Council express their sympathy
"
His wife Ada (née Kay) was working at the War Pensions Department in Derby.
[William was an acting captain when he was killed and although recommended for a MC this was not awarded.]

Army Record
Formally a Private 21 Bn. Royal Fusiliers, appointed to a commission 14/01/1915.
Enlisted into Royal Fusiliers 15/09/14, aged 21, a Bank Clerk living at Crich; had been in the Cadet Corps at Derby School. He was 5ft 7½in tall and weighed 128lb having grey eyes and brown hair. His next of kin was his father Charles Joseph Else of Ambergate.
15/09/14 Posted to RF
23/01/15 Discharged from RF on receiving a Commission in 10th Bn Notts & Derbys

West Leigh
Ambergate
8 January 1918
Dear Sir
Lieut. W.E. Else 10th Sherwood Foresters (attachd to 17th)
Your telegram of yesterday the 7th announcing the deat in action of Lieut. Else was received with great regret. Will you please note that Mrs W.E. Else is now in residence at the above address. "West Leigh", Ambergate, to whom all further communication should be addressed.
Lieut. Else was married on December 11th 1916, and the address of the telegram was to his father at Park Lodge.
Any further particulars having reference to how he met his death will be gratefully recieved by both his widow, and his father
your obedient servant
Arthur Kay
(Parent of Mrs Else)

10th January 1918
The Military Secretary presents his compliments to Mr Kay, and in answer to his letter of 8 January, begs to inform him that no particulars have been received concerning the death of Lieutenant W.E. Else, Nottinghamshire & Derbyshire Regiment, beyond that he was killed in action on 3 January.
The Military Secretary suggests that further information might be attained by writing to the
Officer Commanding, attached 17th Battalion, Nottinghamshire & Derbyshire Regiment, British Expeditionary Force, who will probably be only too glad to supply any details in his position.
The Military Secretary much regrets that the notification of Lieutenant Else's death was not sent to Mrs Else but the fact that he was married had not been notified to the War Office so the telegram was said to his father who was registered as his next of kin.
The Military Secretary is desired by the Secretary of State for War to express his deepest sympathy with Mrs Else in the loss of her gallant husband.

His Army will named his wife, Ada Evelyn Else, and brother, Charles Glossop Else as his executors. The gross value of his estate was £380 12s 4d. His medals were sent to his wife

Corresponce shows the family had problems getting to £6 10s 6d owed to the late Lt. Else from the War Office. Solicitors were involved.

The Commonwealth War Graves Commission records his rank as Captain although newspaper reports name him as Lieutenant. The fourth bell in St Mary’s Church, Crich, which was recast in 1928, is dedicated to William Else. 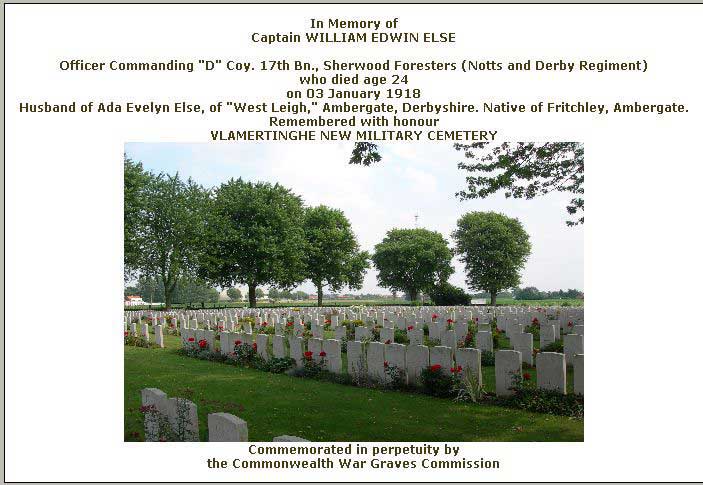 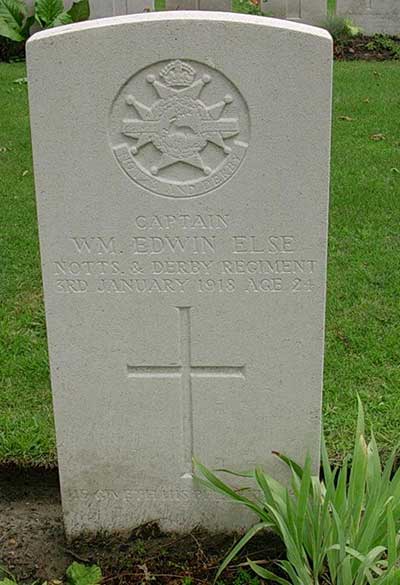 William Else's brothers Guy Else and Charles Else are also on the Roll of Honour.