Biography
Walter, one of the Curzon brothers, worked as a farm labourer before enlisting at Matlock in 1916 and being posted to the 10th Foresters. During 1917 he was wounded by shrapnel and hospitalised. Returning to his battalion he received a gunshot wound and died on 25th March 1918. He is buried in the Iwuy Communial Cemetery, France, and remembered on the war memorial at Crich.

Derbyshire Courier, 14 July 1917
CRICH CASUALTIES
Mrs H. Curzon, of the Common, Crich, received a brief intimation on Friday that her youngest son, Private Walter Curzon, was wounded, and is in hospital in France. The news was sent by a nurse from the institution and states that Private Curzon has been wounded by shrapnel. He is the youngest of five brothers serving with the colours, one, Private Alfred Curzon, having recently been reported killed.

Derbyshire Times 21 July 1918
CRICH SOLDIERS DEATH
Official notification has been received that Pte. Walter Curzon of the Sherwoods, son of Mrs Hannah Curzon, of Crich Common, has died in hospital in France. He enlisted about three years ago. A brother was killed in France about two years ago and there are two other brothers serving in the Forces. 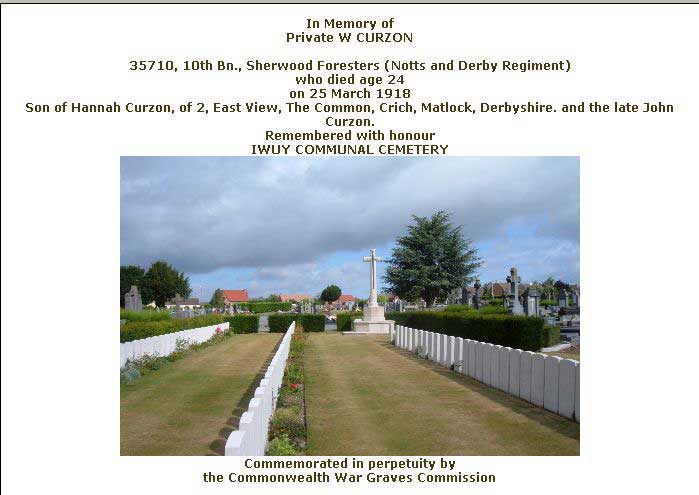 Walter Curzon's brothers Samuel Curzon, Frank Curzon and Alfred Curzon (who was also killed) are also on the Roll of Honour.