Biography
William was employed as a blacksmith at Glossop’s woodyard at Ambergate. He continued his trade whilst in the army and, at Christmas 1915, whilst working behind the firing line, he was kicked in the head by a horse and injured. After demob, he returned to Crich. He married Lucy Smith in 1920 at Crich. Lucy was sister to Frederick Smith and had a son and three daughters. For many years, the family lived on the Common.In the 1911 census, before he joined the Army, William lived at Dial Farm, Crich and worked as a blacksmith. 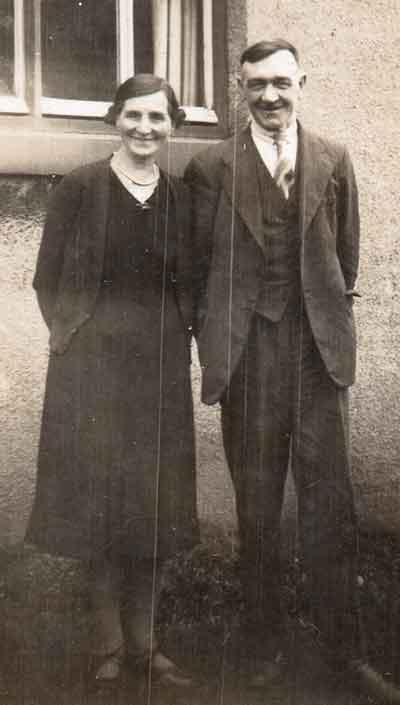 Derbyshire Courier, 25 January 1916
CRICH CORPORAL'S PAINFUL INJURY
Cpl William Cooke, of the Royal Field Artillery, who is attached to the shoeing and smith's department (BEF) writing home to his parents, Mr and Mrs G. Cooke, Tor View, Crich Common, informs them that he met with an accident on Christmas Day. He says that whilst following his occupation just behind the firing line in France he was severely kicked on the head by a horse and sustained a painful injury. He writes that he is now progressing favourably and expects getting out of the doctors hands soon after the time of writing his letter. Cpl Cooke at the time of his enlistment, was employed as blacksmith at Messrs Glossop's of Ambergate.

Derbyshire Courier, 16 November 1918
CRICH, LEA, & HOLLOWAY
A bitter experience befell Mr and Mrs George Cooke, of the Common, Crich, on Monday, four after having heard from their son Pte. Duncan Cooke, a few days previously that he was coming on leave, wire reach them to say he had died of bronchial pneumonia at a base Hospital at Rouen. Pte. Cooke, who was attached to the Sherwood Transport section, had started from the front on leave, but on reaching Rouen was detained there through an attack of influenza. This developed to pneumonia and he died on Thursday of last week. Pte. Cooke joined the Sherwood's about 4 years ago. He was a prominent player of the Crich United football club. Before enlisting he was employed at the Ambergate Mills as a wire drawer he was 25 years of age. His elder brother, Corpl. William Cooke, is in France.

William Cooke's brother Duncan Cooke is also on the Roll of Honour.