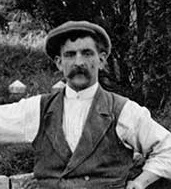 Biography
He was named Isaac after his uncle. Ike, as he was known, and brothers Luke, William and Tom were all born at Crich. He was a builder’s stone mason. Initially serving with the York & Lancs Regiment he was later transferred to the Labour Corps. After demob, his masonry skills came to the fore as he worked on the war memorial at St Mary’s, Church. Luke, one of his brothers, was one of the named men on the memorial.

Isaac Coleman on the right with Walter Fantom on the left