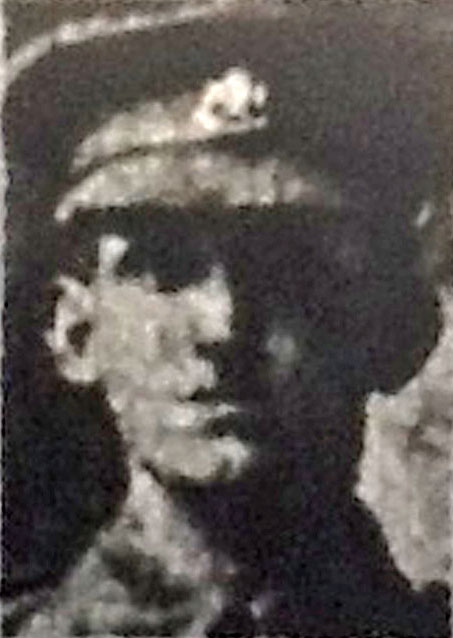 Biography
Fred worked as a wood machinist before enlisting in Feb 1915. He served in France and Italy. He was hospitalised several times – gunshot to the knee, gunshot to the hand, bronchitis then suffering from gas poisoning. On discharge from Lichfield hospital in 1919 he was declared as being fit, though he died later that year in hospital at Leicester. He is buried in the churchyard of St Mary’s, Crich.

Derbyshire Courier, 23 September 1916
UPPER FRITCHLEY MAN AGAIN WOUNDED
Mr and Mrs C. Bown, of Upper Fritchley, have again had news that their son, Private Fred Bown, is wounded and has been conveyed to the base. The intimation is of a brief character. Private Bown, who is in the Cheshires, had only returned to the trenches shortly before, having been in a stationary hospital in France suffering from a shrapnel wound received at Delville Wood on 27th July.

Derbyshire Courier, 17 August 1918
Private Fred Bown of Upper Fritchley, is at present ill in hospital suffering from gas effects. Mr and Mrs Bown, his parents, had news on Monday that he had been taken to the Stationary Hospital, St Omer. This is Private Bowns fourth experience in hospital. He has been twice wounded and once ill previously. He has been in France and Italy for 3½ years.

On his discharge he was declared as being fit. However, later in that year he died at Leicester Hospital aged twenty-two. He was then interred in Crich churchyard.

Derbyshire Courier 26 July 1919
The death took place at Leicester on Sunday of Mr Fred BOWN, of Fritchley. Mr BOWN who was 22 years of age served with the forces throughout the war being attached to the Cheshires. He was badly gassed and he suffered from its effects after demobilisation. He was also wounded severely. Before joining the army Mr BOWN was employed at Messrs Joseph GLOSSOP’s timber works at Ambergate. The remains were interred at the Parish Churchyard, Crich, on Thursday.