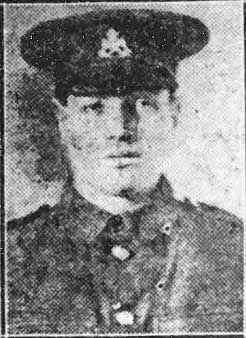 Biography
Harry was a native of Crich, a brother of Anthony Bowmer, Working at Cliff Quarry, he enlisted in Nov 1914. Posted to France he was twice wounded,once in 1916 then in 1917 when he received a gunshot wound to the left arm when ‘going over the top’ in the Lens district. In Nov 1919, he was discharged due to wounds. Twice-married, he had three children and settled at Middleton-by-Wirksworth during the 1930s.

Medal Roll Index
Awarded the Victory, and British War Medals.
He was also awarded the Silver War Badge after being discharged with wounds.

Belper News, 17 November 1916
CRICH BROTHERS WOUNDED
Mr and Mrs Joseph Bowmer of Crich Carr, have received a note from their son Private Anthony Bowmer, of the Notts and Derbys, who was seriously wounded last month and who is in hospital in France. A few weeks ago he had one of his legs amputated and now unfortunately the other leg, which was so badly injured by shrapnel at the time, has had to be removed also, otherwise his recovery would have been hopeless. He was a strong powerful man about 6 foot in height, age 26. He left school at 14 and went to Messrs Sims, Whatstandwell, to learn stone dressing. Afterwards he went to Mansfield and became a miner, from which place he enlisted about 18 months ago.
His brother Private Harry Bowmer who is also in the Notts and Derbys, got wounded last month, but recovered quickly and is again in the trenches. He is 22 years of age, worked at the Cliff Quarry, Crich, and join the Colours directly the War commenced.

Derbyshire Courier, 4 August 1917
CRICH CASUALTIES
A chum of Private Harry Bowmer, Sherwood Foresters, of Crich Carr, has written to Mr and Mrs Bowmer informing them that their son has again been wounded. He writes: "Your son, Harry, landed at Southampton the other day and is going on a hospital train to the Midlands. Although wounded in the left arm he seemed to be getting on fine." Confirmation of the news was received from the Infantry Record Office, Lichfield, the official notification stating that Pte. Bowmer was wounded by gunshot in the left arm and had been admitted to the 11th Stationary Hospital, Rouen, on 20 July. Later Pte, Bowmer wrote himself, informing his parents that he was an inmate of the Stourbridge Section General Hospital. He says that although wounded he came off very lucky, as they had a warm time of it when "going over the top" in the Lens district. Pte. Bowmer was wounded last September, when he was hit by a piece of shell. His brother Pte. Anthony Bowmer, was also seriously wounded at the same time, being hit in both legs by gunshot.

Harry BOWMER's brother, Anthony BOWMER, is on the Roll of Honour.