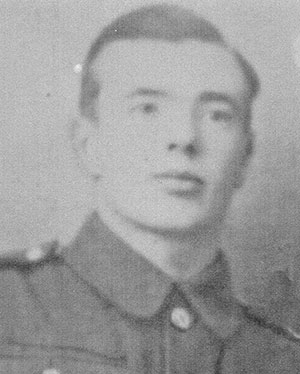 Biography
His parents were Sarah Bollington and William Martin who married in 1913 after having at least nine children. The children were also known by their father’s name – MARTIN. Alfred was born in 1896 at Heage, he and his siblings were registered with their mother’s surname of Bollington, but also used their father’s surname, Martin. Crich-born He was a coal miner and lime-stone quarryman before he enlisted. Enlisting in 1914 with four Crich friends, William Thomas Ellis Curzon, John Thomas Grice Walker, Walter Mellors and Jack Cauldwell ( they had consecutive service numbers) he served with the 2/5th Foresters. He was wounded when serving in both Ireland and France. Marrying Mabel West in September qtr 1919 (Louth reg district)in 1920, he had five children; a son died in infancy. The family moved to Langold, Notts, and Alfred latterly worked as deputy at Firbeck Colliery. 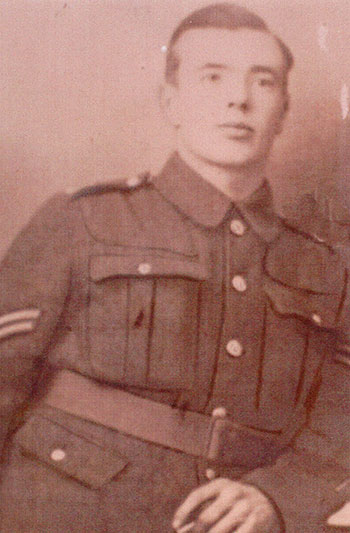 Although listed as Private on the original Roll his Medal Record and photo above shows him as Corporal.

After the war he was involved with the St John's Ambulance Brigade. 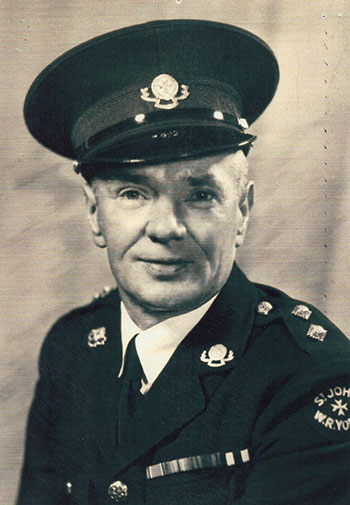 Medal Index Record
He was awarded the Victory and British War medals.

Belper News, 19 October 1917
Corporal Alfred Martin, Trench Mortar Battery, son of Mr Wm Martin, Coddington, Crich, has been wounded in the chest by shrapnel, and is now in hospital at Chelsford. Corporal Martin enlisted in August 1914, and was wounded in Ireland during the rebellion. In June last he was also wounded in France and only left hospital at the end of August. He is 22 years of age and formerly worked at Wingfield Manor Colliery.

Derbyshire Courier, 12 October 1918
From a base hospital in France, Private Nelson Martin has written to his father Mr William Martin, Sun Lane, Crich, informing him that he had been wounded in the knee. His brother Cpl Alfred Martin, has just recovered from Illness after a spell in hospital.

Derbyshire Courier, 8 March 1919
Before leaving France, Cpl Alfred Bollington, of Sun Lane, Crich, who has recently received his discharge from the Army, was the recipient of a certificate in recognition of his bravery. The certificate presented and signed by the Major-General commanding the 34th Division, is as follows: – "to Cpl Alfred Bollington, 102 L.T.M. Battery. Your brigadier has reported that on the fourth of September, 1918 at Kemmel, you displayed conspicuous courage and gallantry in firing your trench mortar under heavy machine-gun and rifle fire, thus enabling the infantry to advance." Cpl Bollington is one of several brothers who have served during the war, his service extending to four years and three months. Driver Arthur Crowder is another Crich soldier who has received a similar distinction for bravery in the field.

[Note: the L.T.M. Battery was the Light Trench Mortar Batter. These batteries were all manned by infantry men taken from the various regiments in whose area they were sited. September 1918 is of course when the British re-took Kemmel from the Germans.]

Alfred's brothers Nelson Bollington and William Bollington are also on the Roll of Honour.