Biography
Fred was born at Whatstandwell in 1893, his parents were Fred and Hannah Bates. They later moving to Ambergrove, then to Fritchley. At the start of the war the family were living at Hill Top View, Fritchley. He enlisted as a territorial with the 1/5th Foresters in 1912. He was transferred to the Reserve in Nov 1914 and discharged as medically unfit for war work a few weeks later. During the early war years, the Bates family relocated to Heckmondwike, Yorks. Fred remained in that area for the rest of his life, married in 1926 and had a son. He married Annie Bennett, (Dewsbury Registration District), June Qtr 1926. 'Annie' is the name given on the marriage registration, though her name is given as 'Sarah Ann' on electoral registers, and also on the GRO death index, and on her burial record. He later worked as a machine minder in a woollen mill. Fred passed away in 1949 and was buried in his parents' grave in Liversedge Cemetery (no gravestone).

Army Service Record
Frederick Bates enlisted, before the start of the War, on 29 April 1912 at Belper. He was a general labourer aged 19 years 4 months and lived in Crich Carr. His height was 5 ft 10½ and he stated he was C of E.
At the start of the War, on 21 November 1914, he transferred to the Reserve. His address was now High Tor View, Fritchley. Next-of-kin were father, Frederick, mother, Hannah, of Hill Top View, Fritchley.
Frederick was discharged as being medically unfit 7 December 1914. two weeks after his transfer to the reserves. His record stated: medically unfit for further military service 156 (ii). He was shown as serving at home 5 August 1914 to 7 December 1914.

Notes
Fred, and brothers Samuel and Harold are remembered in the Heckmondwike Memorial book. Frank is not mentioned here. 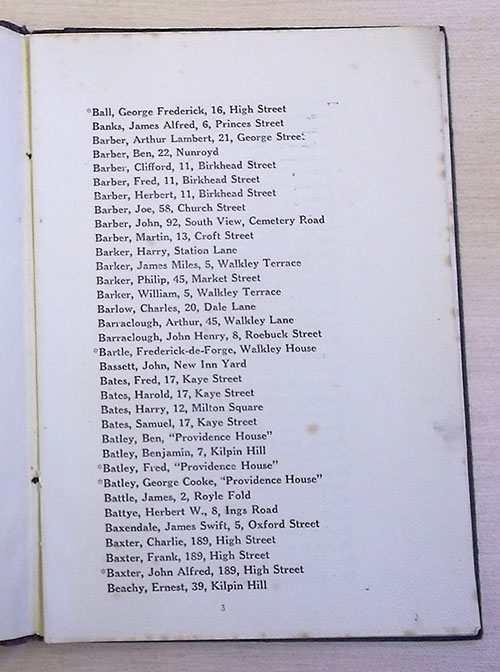 Fred, Samuel and Harold Bates in the Heckmondwike Memorial Book

Fred's brothers Frank Bates, Samuel Bates and Harold Bates are also on the Roll of Honour

Register of Electors: Polling District of Norristhorpe; Township of Liversedge
1918 (Division I): Shows Fred Bates (the Elder) and wife, Hannah – living on South Terrace.
1918 (Division II): Shows three of their sons: Fred Bates (the Younger); Samuel Bates; Harold Bates – living on South Terrace. Samuel and Harold are both absent on account of naval or military service. We know that Fred had been discharged very early on in the war, in December 1914.
1919 (Autumn) (Division II): Shows the same three brothers, but now also their younger brother, Frank Bates. Samuel and Harold are still absent on naval or military service.
1920 (Spring): All the family are now shown on the same page (the township is no longer split into 'divisions'), still living on South Terrace (though the parents are listed separately to the four children, for some reason). Note that Harold is still absent on naval or military service, though Samuel isn't. Frank, however, is now also listed as absent - he must have been a fairly late entrant to the war, given that he was born in September 1899.
1921 (Autumn): All the family are now listed together; none of the sons are now listed as absent voters.
1922 (Spring): All the family are listed together.