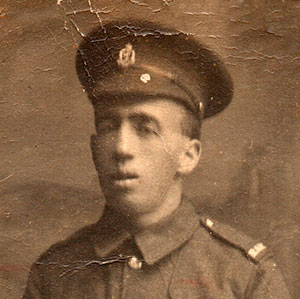 Biography
William was born in 1888 at Wakebridge and raised at Crich Carr. His parents were Samuel and Fanny Barber. He married Tansley-born Mary Booth on 11 April 1914; she worked at Lea Mills, he was a farm labourer. They had a daughter Marion.
He attested 15 July 1916, aged twenty-seven, at Bakewell giving his address as Stable Yard, Scotland, Tansley. His occupation was horseman and nurseryman. His height was 5ft 7½in and he was recorded as being C of E. He was transferred from the East Staffordshire Regiment to the RAMC and appointed acting corporal, with pay, on 12 May 1919. He reverted to private 27 July 1919 but seemed to have been promoted to full corporal after that. William was demobbed 11 January 1920.

Notes
Although William's surviving records indicate he was a corporal, the rear of the photograph above states he was a sergeant. The addressees – Mr and Mrs Booth were his father-in-law and mother-in-law. 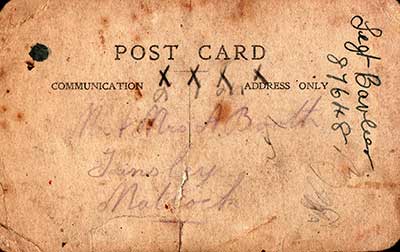 Various records for William show him as Private; T/Cpl; Transport Corporal and Sergeant.

The likelihood is that he was a Temporary Corporal