Biography
James was born at Church View, Crich on 9th March1894, his parents were James and Margaret Barber. When he enrolled on 3 August 1917 (he was a wagon oiler on the Midland Railway) and joined the RNAS 14 August 1916. He transferred into the RAF 1st April 1918. The RAF Muster Roll gives his rate of pay as 1s 8d. The RAF was formed on 1 April 1918. James died of pneumonia on 7 February 1919, a few months after the armistice, and he is buried at Cologne Southern Cemetery. More than one thousand Allied prisoners and dozens of German servicemen were buried in Cologne Southern Cemetery during the First World War. Commonwealth forces entered Cologne on 6 December 1918, less than a month after the Armistice, and the city was occupied under the terms of the Treaty of Versailles.
James’s squadron moved to Germany as part of the Army of Occupation in January 1919, serving there until the August.

Derbyshire Courier 26 August 1916
Mr. James BARBER, son of Mr and Mrs J BARBER, Church House, Crich, has passed the necessary tests for acceptance into the Royal Flying Corps and on Tuesday left to commence his training.

Derbyshire Courier; 22 February 1919
CRICH, LEA and HOLLOWAY
Confirmation of the news of the death of Air-Mechanic James Barber of Church House, Crich, was received on Wednesday by his father in a letter from Air-Mechanic F. Johnson, Royal Air Force, Germany, who states that he was a close friend of Air-Mechanic Barber. "We were all very fond of him," he says, "and he had a very touching funeral. At the first opportunity I hope to visit his grave in Cologne."

Later in the article –

News was received by Mr James Barber of Church House, Crich, on Thursday last week, that his second son Air-Mechanic James Barber, died in Cologne on 7 February of bronchial pneumonia. He joined up two and a half years ago. A quiet unassuming young man and possessed of a keen interest in mechanics, he made good progress in aircraft work and was generally esteemed by his officers. He was 25 years of age. In civil life he was employed at the shops of the Clay Cross Company at their Crich Limestone Works. 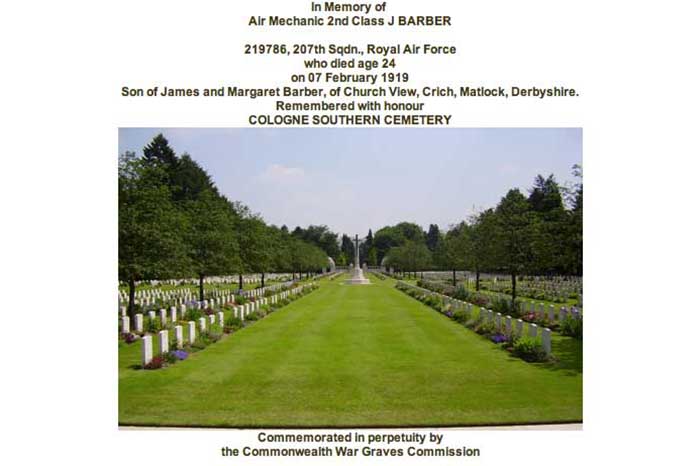